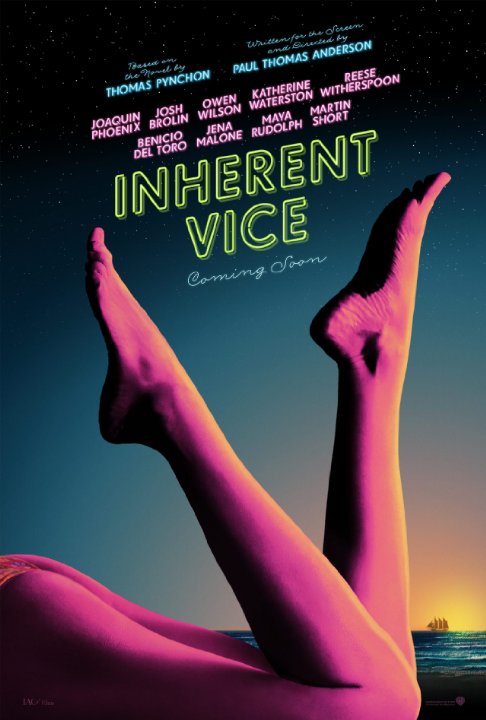 Shapeless and incoherent, "Inherent Vice" is so preoccupied trying to prove how clever and unconventional it can be it forgets to make any sense of itself.

It's basically 'The Big Lebowski' meets 'Chinatown' and it's twice as complicated but that's what makes 'Inherent Vice' so interesting and often entertaining. The cast is top notch and the proverbial barrel of laughs never runs dry even with a two and a half hour running time. I'm not familiar with Paul T. Anderson's filmography as a director and I've only seen 'There Will Be Blood' so I cannot comment on how it measures up to his other movies. But as far as quirky crime dramas go, this was a lot of fun to watch even when it's overstaying its welcome.

A pot-smoking Private Investigator is visited by his ex-girlfriend who asks for his help foiling a plot to have her wealthy new beau committed to a mental institution by his wife and her lover. Inherent Vice is pretty much how I'd imagine Chinatown would play out if The Dude were investigation rather than J.J. Gittes. We follow a drug-addled Joaquin Phoenix during his convoluted investigation into a mysterious operation called "Golden Fang", as he struggles to tell the difference between genuine threats and his own drug-fuelled paranoia and lapses in memory. Josh Brolin provides most of the best moments as a hippie-hating hard-nosed cop and the supporting cast are all good, but the plot is little more than a series of whispered info-dumps in a haze of pot smoke and it isn't really funny …

first of joaquin phenix is brillaint in this movie. he is in my view is one of the best actors working today he doesn't just act he is the character and he is facinating to watch like he was in the underrated the master.
but you may need to be on drugs to understand this movie. its a 1970's set movie thats full of drugs weird characters and long naratives. with a great cast.
joaquin plays a druggy private eye . while josh brolin plays a dodgy cop called big foot . josh is really good in this and plays it perfectly as well. one of the best roles ive seen him do.
as for the move its interesting weird slow its like a weird dream drug fulled trip that you feel like your on and have not much idea what is exactly going on. it has dry weird humour quirkness and a very cool sex scene.
but …

Inherent Vice is about a private eye Doc Sportello's ex-old lady suddenly out of nowhere shows up with a story about her current billionaire land developer boyfriend whom she just happens to be in love with, and a plot by his wife and her boyfriend to kidnap that billionaire and throw him in a looney bin...well, easy for her to say. It's the tail end of the psychedelic `60s and paranoia is running the day and Doc knows that "love" is another of those words going around at the moment, like "trip" or "groovy," that's being way too overused - except this one usually leads to trouble. With a cast of characters that includes surfers, hustlers, dopers and rockers, a murderous loan shark, LAPD Detectives, a tenor sax player working undercover, …

No posts have been made on this movie yet. Be the first to start talking about Inherent Vice!