The Legend of Tarzan Movie Information 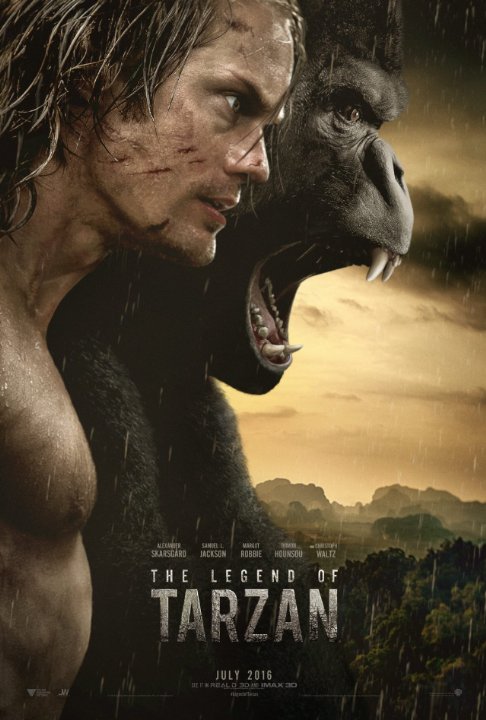 Plot: Ten years after leaving the Congo, Tarzan, now the Lord of Greystroke, has acclimated to life in London with his wife, Jane. But he is always reminded of where he came from and when he is invited as an emissary back to the Congo, he accepts, only to find himself at the center of a mining controversy - one that threatens all those he holds dear. -- Chris Kavan

Let us gritty reboot Tarzan, shall we? Other than the magnificent amount of work that Alexander SkarsgÃ¥rd put in to getting to look that good - pretty much everything else about the movie is forgettable. The CG is subpar, the story is rote and the characters mostly stock (other than a comedic side-kick part for Samuel L. Jackson). If this was meant to kick off a franchise, I'm guessing it's not going anywhere after this completely average result.

For a summer movie like this with an iconic character like Tarzan, you at least think this will be dumb fun right? No. The Legend of Tarzan is such a downer of a film that I'm kinda glad I didn't watch it at the cinema. The scenes were Tarzan is fighting other animals comes off very laughable just by the awful CGI and how dead serious it is.

So much wrong with this film. The antagonist's whole agenda is to deliver tarzan to a tribal leader, so the leader will give him diamonds. The diamonds will be used to pay 20k mercenaries to conquer the country so that he can get the diamonds.... Why not just take the mercs who clearly haven't been paid yet (the danish king can't even pay his debts) and just take the diamonds outright. Bringing tarzan back to africa shut the whole plan down. Not to mention Tarzan went full Beast-Master in this flick. Apparently being raised by gorrillas gives you power over all Africa has to offer. He never reached out to the crocodiles, but when the steam boat was going down, they decided to get in on the action, too, eating the main villian and helping out Tarzan. Even though the ship just blew up 2 …

LoT is servicable but not quite memorable...

David Yates brings his directing chops to adapting Tarzan for the umpteenth time in this action packed adventure. Costing almost $200M it does look expensive and it works as a pulpy popcorn flick.
The script surprisingly has a social conscious reflecting modern sensitivities about a story featuring a white man brought up in the African jungle. Admirable as it is, the message does prove unwieldy and might seem too on-the-nose for some viewers. The film is at least wary enough not to make the African characters mindless stereotypes and I applaud its confidence in addressing a historical atrocity such as the Belgian Congo's management head on.
What saves Tarzan from drowning in its moralizing and CGI fueled action is the cast and they do very well to breathe life into their thinly …

"Bring it to me. Bring him to me. And you shall have your diamonds."

Once and a while my mother allowed me to choose a comic strip at the store when I was a small boy. I always opted for a Tarzan comic strip. It appealed very strongly to my imagination at that time. That ruler of the jungle who used lianas to travel and who ruled over those wild fellow residents of the jungle. Even films from the old days with Johnny Weissmuller captivated me. Weissmuller was more impressive compared to this Tarzan. I'm talking about the size of his thorax and those developed biceps and triceps. Tarzan in this movie is a tad less muscled and he's already adapted to modern society. No "Me Tarzan.You Jane" conversations. He rather listens to the name John Clayton (Alexander SkarsgÃ¥rd). A distinguished …

No posts have been made on this movie yet. Be the first to start talking about The Legend of Tarzan!