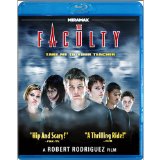 Plot: A typical high school full of typical cliques and characters - until the teachers and students start acting different - and a handful of students discover an alien parasite. Now all they have to do is find a way to stop it. -- Chris Kavan

Robert Rodriguez's teen horror film borrows too much from classic 1950s sci-fi movies for its own good. But as a 'Body Snatchers' meets 'Scream' type of story, it is entertaining for the pop culture references and some surprisingly gory kills. The all star cast is onboard for the gruesome hijinks.

The story is about a typical high school full of typical cliques and characters - until the teachers and students start acting different - and a handful of students discover an alien parasite. Now all they have to do is find a way to stop it. This movie is scary and gross. Robert Rodriguez has a odd look to he's movies like go watch planet terror and the spy kids.

Not on the same level of say 'Body Snatchers', but still fun nonetheless. Once it gets going, it doesn't stop.

"The Faculty" by Yojimbo

Elijah Wood and the usual collection of high school stereotypes begin to suspect that the school is being taken over by aliens. Invasion of the Body Snatchers meets Buffy in one of Robert Rodriguez's early Hollywood projects. Unfortunately he obviously had not made his mark on the establishment yet and lacked the confidence to make this film his own; as a result it comes across as a very generic teen horror movie. It's not quite funny enough to be a comedy, nor scary enough to be horror, so it falls a little between two stools. The young cast are all decent (apart from Josh Hartnett's BIZARRE hairstyle!) and Robert Patrick is very good at the ordinary guy with an underlying sense of menace. Fans of Buffy will enjoy it as it's basically just like a feature length episode of the series; …

No posts have been made on this movie yet. Be the first to start talking about The Faculty!