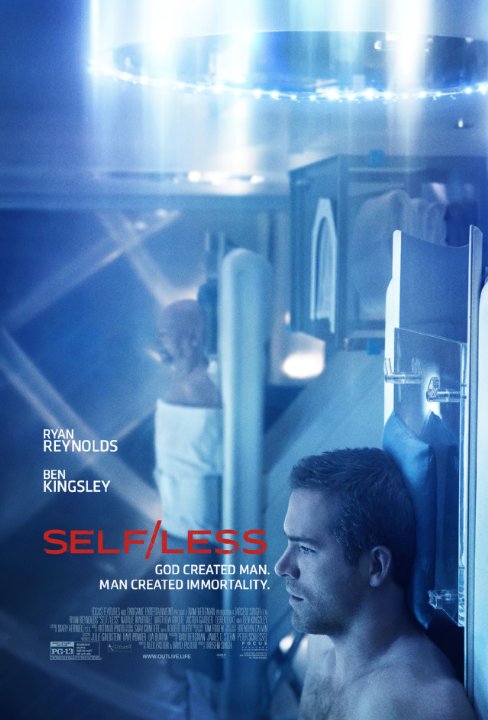 Plot: A wealthy man, dying of cancer, uses his considerable fortune to undergo a radical medical procedure that transfers his consciousness into the body of a healthy, young man. But after the seemingly successful procedure, he finds himself in part of a deeper conspiracy when he finds out the truth behind the origins of his new body. -- Chris Kavan

A standard sci-fi/action type film that, despite starring Ryan Reynolds, is pretty much instantly forgettable. No one really stands out - hero or villain and the technology is a complete fairytale. Tries to throw some twists at you, but mostly fairly predictable. Do yourself a favor, just watch Deadpool a few more times instead.

Self/less had potential to be a great movie, I mean with an interesting story like this about the side effect's of immorality could have been a good and interesting movie, but sadly what we've got was rather bland. Self/less is one of the most pointless and boring movie experiences of 2015.

A terminally ill property tycoon undergoes a process to transplant his consciousness into a young, healthy body but when he starts to experience memories not his own, he uncovers the dark secret behind the project. And I bet that you just cannot guess what that secret is, right...? Yes, Self/less is one of those one idea near future sci-fi action movies that have been a staple of Hollywood since the 1980's. Very similar to the likes of The 6th Day, Paycheck and Limitless, Selfless does at least make some small attempt to grapple with the morality of the premise; namely the unstated and underlying assumption that the life of a rich man should be somehow intrinsically worth more than that of a poor man. Despite its pretensions to being high concept, Ryan Reynolds inevitably ends up going …

No posts have been made on this movie yet. Be the first to start talking about Self/less!