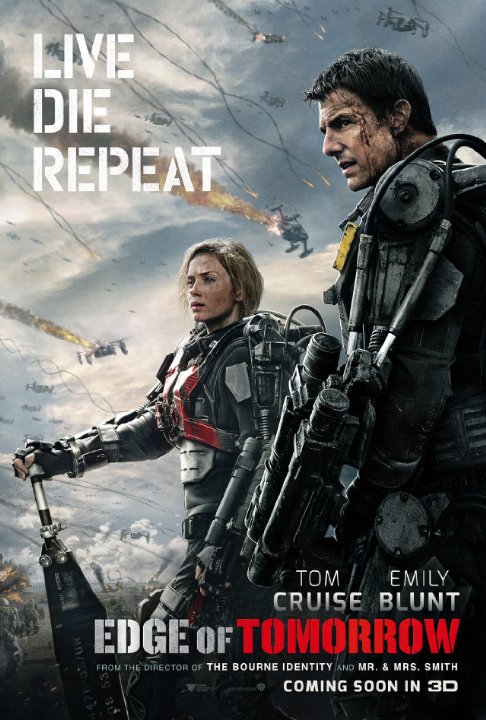 Plot: On an alien battlefield - the war is finally coming to an end - but for one soldier, the war never ends as he is caught in a time loop reliving the same battle over and over again. Having been thrown into the fire untested and untrained - each time he learns more about becoming a soldier - and just maybe he will find out what happens when he survives the assault. -- Chris Kavan

I didn't expect this movie to be both interesting and fun. Cruise and Blunt made a good duo in this action-packed, humorous film.

This film reminded me of a cross between Groundhog Day, Independence Day, and a touch of Minority Report. Concept was done before but it is done in a sci-fi setting. Cruise delivers and Blunt was believable. Had a touch of comedy romance despite the seriousness of the flick. Overall, one of the best thrill rides your going to experience in a long while.

Frankly, thus far I am very disappointed about the movies I was looking forward to for so long. In "Godzilla" the infamous monster was totally absent, "Transcendence" was too ordinary and meaningless, "Divergent" was just another SF Fantasy tale for teenage girls, "300 Rise of an Empire" was just like "300", "The Expendables 3" looked exhausted and are in need of a replacement and "Pompeii" was a storm in a teacup. Only "Robocop", "Guardians of the Galaxy","Maleficent" and "Captain America: Winter Soldier" could surprise and enchant me. I wasn't expecting much from "Edge of Tomorrow". Partly due to the fact that Mr. Cruise probably would be shining on the screen again the way he always does. That's what I thought! What a …

Doing the same thing over and over-and it's fun!

An action-oriented spin on the formula laid out in Groundhog Day, Edge of Tomorrow/Live Die Repeat is a cleverly written crowd-pleaser with two great performances from Tom Cruise and Emily Blunt. Doug Liman does the impossible to keep the film a rollicking and often funny blockbuster without the premise growing stale or boring. Bravo, sir. Cruise is STILL a solid lead actor when it comes to playing action heroes and he has fun here playing against time as someone who's originally a bloody coward. Emily Blunt is predictably beautiful despite playing a battle-hardened soldier but she completely sells it that she is a tough-as-nails fighter. It's quite a transformation from her roles in romantic comedies and costume dramas. The screenplay is one of the more consistently entertaining in some …

"Edge Of Tomorrow" by Yojimbo

A cowardly military media relations officer is conscripted to the front lines of a counter attack during an alien invasion and finds that he keeps reliving the same day over and over again. Groundhog Day meets Starship Troopers in this tongue in cheek sci-fi blockbuster penned by Christopher (The Usual Suspects) McQuarrie. This is the kind of film that in the wrong hands could have been a painfully tedious exercise in American military gung ho machismo, but thankfully McQuarrie makes sure that it never takes itself too seriously and making Cruise's character a rather cowardly, inept soldier works wonders for his likeability. It's also good to see Bill Paxton back in space marine uniform and Brendan Gleeson is as fun as always as his grumpy commanding officer and the battle sequences are …

For my .02 I think they should have stuck with the original title All You Need is Kill - but apparently Edge of Tomorrow must just not have been as eye-catching as they wanted - hence the title upgrade.

Weird.&amp;nbsp; I noticed that when I was on imdb the other day.&amp;nbsp; I guess the &quot;Live, Die, Repeat&quot; marketing was so sucessfull that they're trying to push it even farther to help promote dvd sales.

does anybody understand the ending to this film? its a head destroyeri see they have changed the name of this to live die repeat or something. very strange after its released for so long

So the summer movie season is over,&amp;nbsp; And I think it's pretty fair to say that Edge of Tomorrow was far and away the best blockbuster of the year.&amp;nbsp; Or at least it's the best would be blockbuster, the movie didn't even make 100 million domestic!&amp;nbsp; But despite it's underwhelming box office, I really think this one is going to go down in history as a true action/adventure classic.&amp;nbsp; If you haven't seen it yet, I heavily recommend renting it when it comes out on DVD October 7th!

It is a very good flick. &amp;nbsp;Could have been great with a few changes. &amp;nbsp;Absolutely worth seeing on the big screen