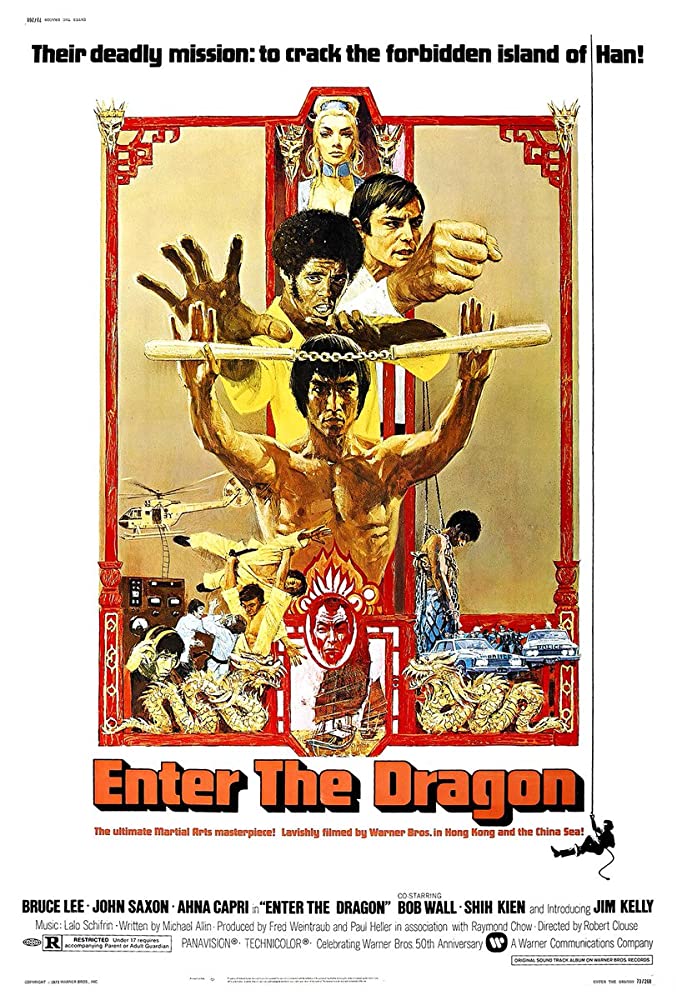 Plot: A martial arts expert is recruited by the government to infiltrate the island of criminal mastermind lord Han during a brutal tournament.

There are a lot of fun scenes and characters in this sometimes campy, but always fun kung fu film. If you want to see Bruce Lee in full action, some of his best stunt and fight scenes are contained in this film.

Bruce Lee's best film. A classic of the genre and a testament to the performer's career.

While many have come since this tournament fighter, none have really come better. Bruce Lee was a solid performer and the plot, though over done now, was pretty interesting. Call it James Bond meets martial arts. A great action drama.

Enter the Dragon isn't what I call a masterpiece of film making or anything near outstanding when it comes to it's characters, acting or story line, but honestly, who comes to see a Bruce Lee movie expecting that? I sure didn't. Just pointing out the obvious things that anyone would find if those chose to watch this with a critical thinking mind, which you would easily spot the problems straight away. But the movie dose deliver on one thing and that's the punch, with it's flawless Martial art fight scenes. This is a very enjoyable movie with Bruce Lee showing off his awesomeness in his last ever film.

Without a doubt, the best part of this movie is the fight scenes and I know it's quite obvious to say …

"Enter The Dragon" by Yojimbo

A Shao-Lin monk is recruited to infiltrate a tournament held by a corrupt martial artist to recruit new members to his organisation. Enter The Dragon was Bruce Lee's final completed film, and this reason alone was enough to make it pass into legend, and it is a monument to Lee's incredible skill and potential. If you look at the film objectively however, it's more difficult to see as a great film in its own right. Take away Lalo Schifrin's excellent score and Bruce and it's 70s exploitation pure and simple; the characters (Jim Kelly's be-afroed black power stereotype sticking it to the man and John Saxon's adrenaline junkie playboy) are cartoon characters,and the crude photography and gratuitous female nudity are all standard elements of the trashy crowd pleasing flicks of the era. The …

Enter The Dragon is Bruce Lee most commercially successful film. He choreographed the fight scenes and was involved with the films creation. Lee is named Lee on the film, whose task is to infiltrate an island of Dr. Han who runs an illegal business (opium and prostitution). This film was a mixture of Bond films, Taken and Bourne. The scenery was pleasing to look at. I just felt it could have been if more of his âreal lifeâ philosophical quotes were used. The last fight scene was cleverly executed, but fight scenes and elegant cinematography doesnât define a classic film. The plot was too light and his manner of infiltrating the island is outdated, but was okay during that period. It could have had more depth if the story was improved. Still, Bruce Lee's presence and …

No posts have been made on this movie yet. Be the first to start talking about Enter the Dragon!