Into the Woods Movie Information 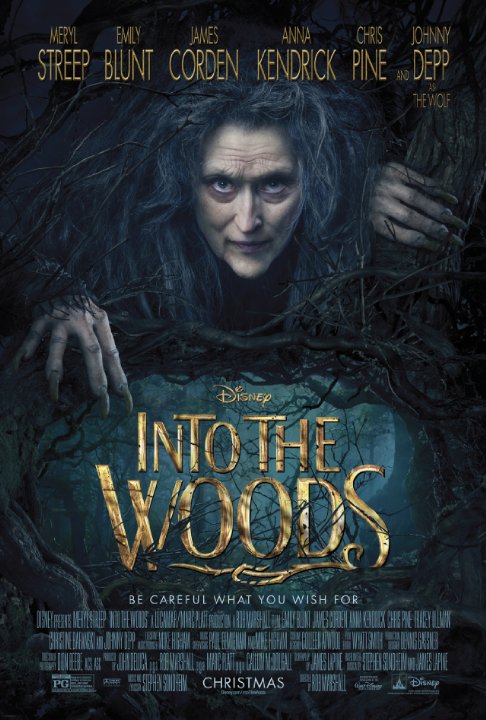 Plot: Adapted from the Steven Sondheim musical, a baker and his wife, looking to life a curse, visit the woods and the witch who lives there: she spins a tale involving many beloved fairy tale characters, including Cinderella, Little Red Riding Hood, Jack and the Beanstalk and Rapunzel. -- Chris Kavan

A musical that's as magical as it is overstuffed.

An absolutely awful movie with terrible music, poor special effects, slow pacing and a dull story that is only partially redeemed by a fun performance by Meryl Streep who steals the ENTIRE movie as the witch, and some demented humor that occasionally works.

Ok well let me start by saying I really did enjoy the movie alot don't get me wrong a fun adventure full of laughs and music however on the other hand the film also had alot of things I found unnecessary for. A kids movie 1.the whole thing with the wolf And red riding hood was super creepy 2.little red riding hood looks more like tween red ridding hood 3. The prince cheats on Cinderella 4.cinderella has gigantic Boobs and they are very noticible at times "but I loved Anna kindric she made a beautiful Cinderella the movie is fantastic just watch about the content I mentioned but fabulous movie

Music lovers this is for you

Well you're not the only one who thought that this was going to be the next Les miserables just by judging on the trailers and early Oscar buzz.

The story is about a baker and his wife, looking to life a curse, visit the woods and the witch who lives there: she spins a tale involving many beloved fairy tale characters, including Cinderella, Little Red Riding Hood, Jack and the Beanstalk and Rapunzel.

I remember very well back in November 2013, that this movie that wasn't coming until like a year and it was already getting so much Oscar Buzz and it's really crazy when you think about. People where already predicting the categories for the movie even when their haven't even seen it yet. Everybody wouldn't shut up about this movie and when the reviews came out for this movie it was a …

I'm still not sure whether I liked this movie or not...It had about four decent songs out of the 20+ other songs scattered throughout, and some of them were just so random and unnecessary. If you're going to make a musical, the musical numbers should help to guide the story along, not stop it in its tracks. Also, I really wish they had cast a different girl to play Little Red Riding Hood because my god was that girl annoying. Every time she sang with that awful, grating Broadway voice I just wanted to leave the theater. Oh, and the Johnny Depp wolf song was a bit pedophile-ish.
If I have to say a few good things about this movie, the way the stories were all connected was sort of clever and that "Agony" song with Chris Pine and Billy Magnussen was pretty great. Actually, every over the …

No posts have been made on this movie yet. Be the first to start talking about Into the Woods!