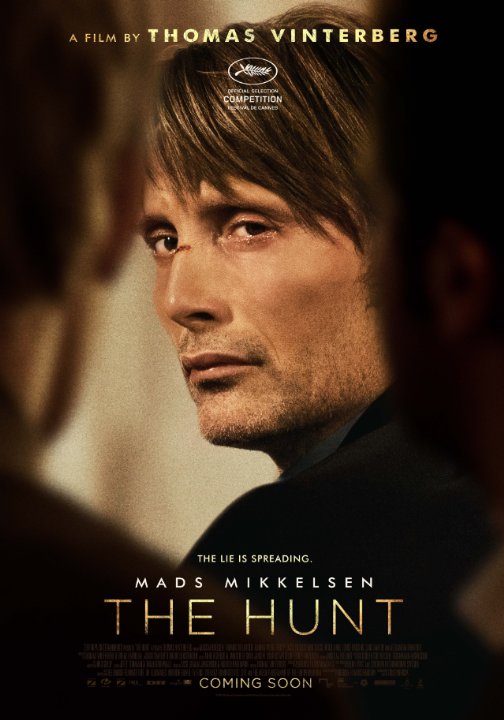 Plot: A lonely teacher, struggling to gain custody of his son, finds his entire world crashing down around him after being accused by a student of sexual molestation and finds everyone in his life turning against him. -- Chris Kavan

Easily one of the best films from 2013 I have seen - the story and acting were completely authentic and for a story grounded in reality, it was surprisingly tense throughout. It just goes to show how quick to judgement we all are, how it changes relationships (both to those close to us, and those around us) and even when the truth finally comes out - how nothing can go back to the way things were. Great performances all around and an ending that will leave you thinking - more than deserves the recognition is has received.

'The Hunt' is completely grounded in realism. The difficult subject matter brings up even more difficult questions as we watch everyone poorly mistreat this situation. What starts out as a 'he said-she said' setup quickly dives dark into a story of wrongful persecution. The film treats this with a tough outlook. There is a constant tight dramatic grip of subtle tension. Thoughts and feelings boil beneath the surface of not just our main character, but of all the characters. Quick judgements turn them against the accused and, in turn, change them into worse beings. That part I found to be most maddening. The ending leaves a great question to ponder after viewing. This is a terrific film!

Base on true events. this movie is really good I mean the acting is good and the writing and the story is very good.

A surprisingly authentic and powerfully engaging drama that will keep you glued until the unexpected ending. It's starts with a teacher named Lucas who works at a school as a teacher. Theo, the best friend of Lucas, has a daughter named Klara who makes a statement that would eventually ruin the life of Lucas. The acting is impeccable and the screenplay is gold. So many provocative lines like: "The world is full of evil. But if we stick together it disappears." "Health and happiness my son." and "What do you see? do you see anything? nothing. There's nothing." Minor observations were the lack of a better soundtrack and better history between Theo and Lucas since they were good friends as Theo mentioned to her daughter. So many subjects touched by this realistic drama such as lies, …

Thomas Vinterberg's direction is stunning. Much is explored of what goes on in a child's mind, and how they behave and are affected by parental neglect.
I wouldn't describe this is a character study, but it does delve in deep into people's psyches, especially into Mads Mikkelsen, who delivers a performance so powerful on the outside, it makes me want to know what the character of Lucas feels on the inside and it is definitely worthy of its praise.

The whole premise just breaks my heart. He is easily on the level of likability as Andy Dufresne. He is a joyful person accused of something he did not do, and the movie is an undoubtable …

No posts have been made on this movie yet. Be the first to start talking about Hunt, The ( Jagten )!