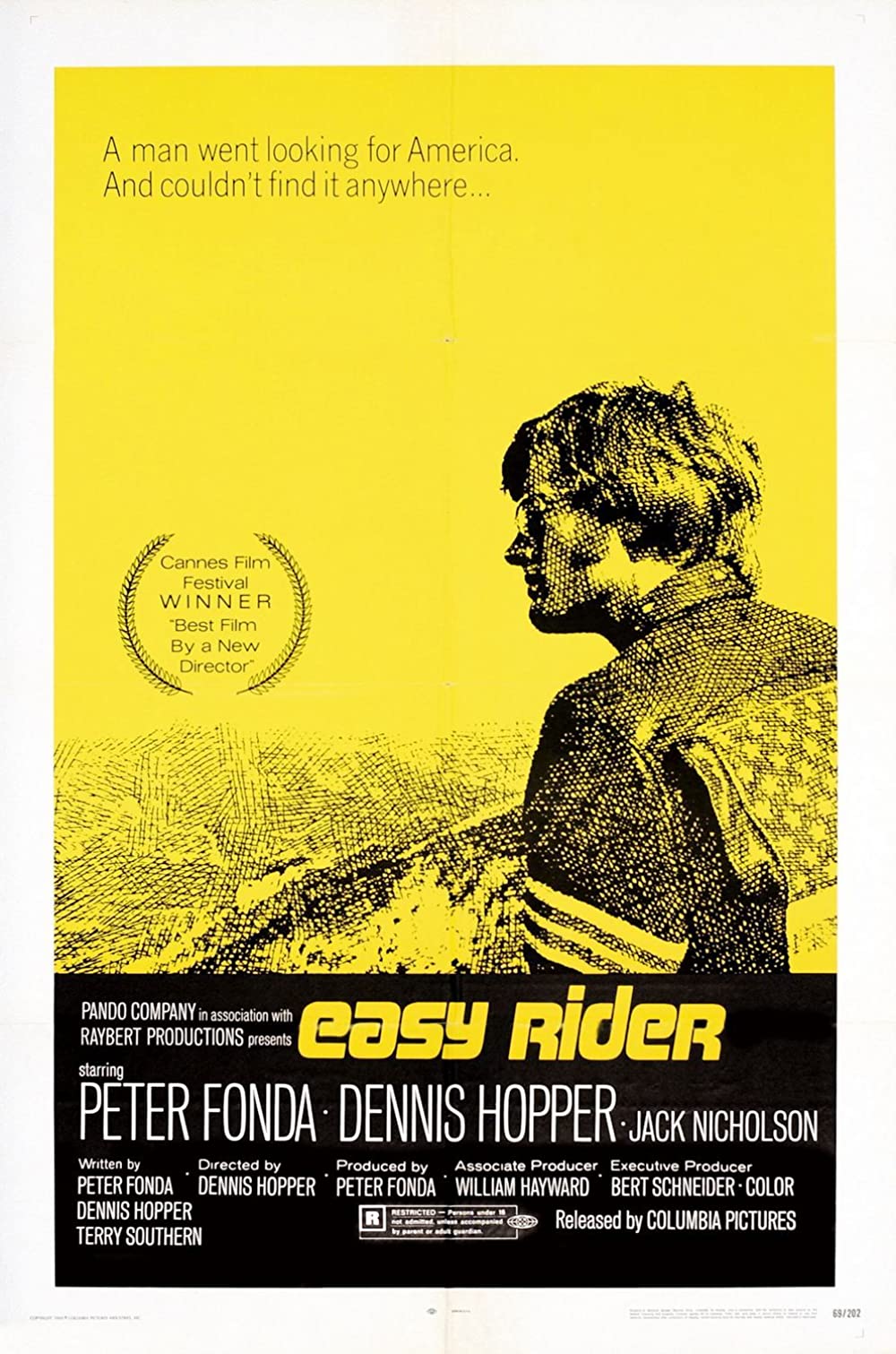 Plot: A pair of hippie bikers make the trek across America while searching for commonalities between themselves and those that live around them.

Forever synonymous with rebellion and the "Born to Be Wild" opening credits song, "Easy Rider" upholds its legacy as a pioneering indie film.

Low budget zeitgeist movie that perfectly sums up the spirit of late 60s america. Some of the metaphors are painfully ham-fisted and it's often unstructured and meandering, but its a fascinating window into the time in which it was made. Jack Nicholson steals the movie as a whiskey swilling lawyer and the shocking ending still packs a punch.

The title says it all. It's a pretty 'easy' going and laid back film. Yet, it paints a culturally significant portrait for the time that it was released. A free-roaming, and narrative free, road picture that defined a generation.

Psychologically disturbing and surprisingly well filmed road movie that reminds us of the true meaning of such mindless motorcycle escapism. The riders forget about a meaning of life they can't digest and hit the road trying to find another one, while Dennis Hopper places this senseless macho rebels into a bizarre reality spiraling downwards. The genre surely does not get any better than this. Of course, the brief appearance of a mad Jack Nicholson was an element that couldn't be left out, the same element that makes the film culminate in a breathtaking, nearly unparalleled acid-trip climax. Oh, the times of junkies and individuals that belonged to that delirious sexual revolution, that and the counter-culture of the American dream...

A film not to everyone's liking depending on how one views it. A basic concept of Wyatt and Billy who are two motorcycle riders on the way to Mardi Gras and meets a few estranged people along the way. Earnest and enticing performances from Hopper and Fonda, which keeps the viewer glues to the screen. Great screenplay with lines from the characters: George - "You know, this used to be a helluva good country. I can't understand what's gone wrong with it." "But they see a free individual, it's gonna scare 'em." Wyatt - "It's not every man that can live off the land, you know. You do your own thing in your own time. You should be proud." and "You know Billy, we blew it." The soundtrack was well researched and very enjoyable, direction, locations and cinematography were picturesque. Only …

Get your motor runnin' Head out on the highway...

Get your motor runnin' Head out on the highway....... So begins the tale of Easy Rider. A movie that taught an American generation how to express themselves. It also taught a lesson later learned in Deliverence, don't fool with southern yokels who yield no brain power or tolerance. I love this movie because it is well acted. I love the soundtrack. (How could you not?) I love its filming of the American landscape. The motorcycles are classic. Peter Fonda, Dennis Hopper and Jack Nicholson perfectly portray the three charecters who are now heroes of epic proportion. But I mostly love the sense of freedom and spontaniety that this movie gives off. The American Dream has always been about freedom. But like George Hanson says; it's one thing to talk about being free, but something else …

Movies of 1969 by Stoney McStonerson

No posts have been made on this movie yet. Be the first to start talking about Easy Rider!