The Company You Keep Movie Information 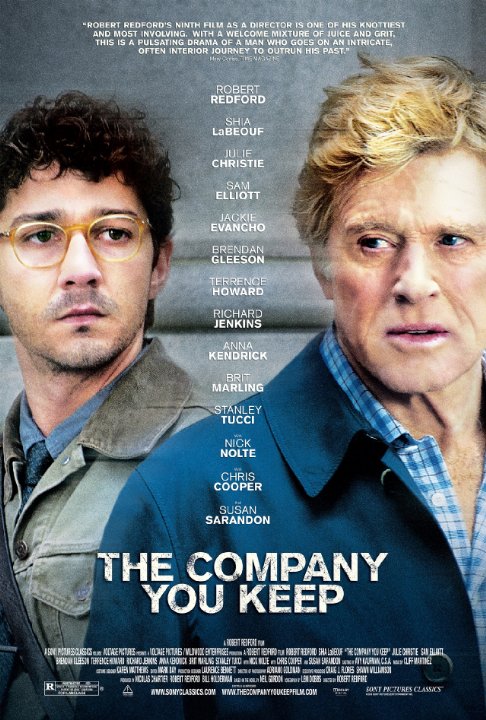 Plot: A former activist for the Weather Underground has been keeping his past buried for years. But an intrepid journalist has uncovered his secret, forcing him to go on the run. -- Chris Kavan

For a movie that has been described by every source as a thriller with a political agenda, it doesn't deliver on either of those fronts. 'The Company You Keep' seems smarter and sophisticated, with an emphasis on realistic presentation, but it's just dull. Nothing much of interest happens for a good portion of the running time, making for a slow and un-engaging two hours. It's overcrowded with a surplus amount of recognizable actors, but most don't have much to do, only showing up for one or two scenes to little effect.

If you don't like overtly political movies for the same reason I don't, that they're too pushy and unrealistic, then you will still enjoy this movie. It's neither pushy nor unrealistic.

Just back from having watched this I was surprised. It was much better then I thought it was going to be. Solid thriller, Shia LaBeouf puts in a very, very good performance as a young reporter. Redford is also good. I would recommend this film without question.

Seeking to combine a chase movie with a detective story, the film is bogged down by superfluous characters, caricatured villains, and a third-act that feels more like a soap-opera than a suspense picture. I wouldnât go so far as to say the film has a bad script, but it does have a clunky one. What makes this even more egregious is that âCompanyâ is filled to the brim with great veteran actors such as Stanley Tucci, Richard Jenkins, Julie Christie, and Susan Surandon, which in this context almost feels like the producers have less than negative faith in the script.

I donât want to make out that this was a bad film, though. In its own unambitious and minor way, itâs reasonably entertaining. It could be argued that the actors alone are worth the price of admission. But I can …

The Company You Keep

The Company You Keep (2013) Decades ago a radical student terrorist group named, âThe Weather Underground,â set off bombs and robbed banks to try and force the American government to end the war in Vietnam. Some of the terrorists were caught, but others are still on the run. Now, a newspaper reporter (Shia LaBeouf) begins digging up the story after one of âThe Weather Undergroundâ members is caught. By the time the reporter is finished, a number of lives will have changed. I generally like Redford's films, but I felt almost as if the amount of stars in this film, such as Anna Kendrick, who plays an FBI agent, was a little like stunt casting, making it sort of a lets see how many stars want to work for Redford, and therefore prop up a script that has huge holes in it. The film …

No posts have been made on this movie yet. Be the first to start talking about The Company You Keep!