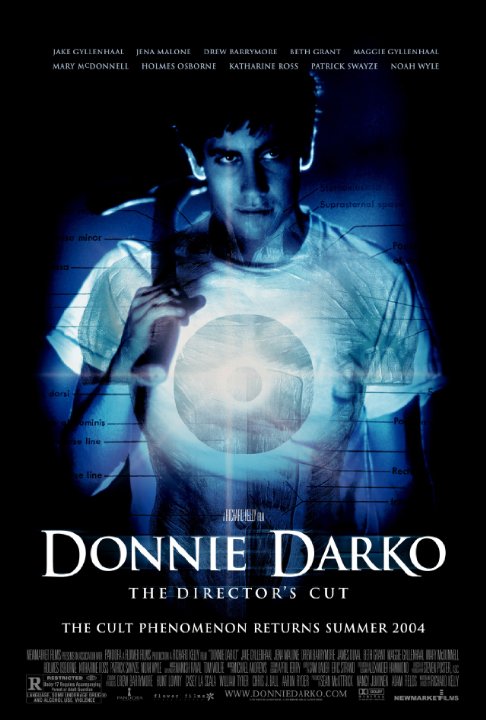 Plot: A movie of a teenage boy who sees an imaginary six foot tall bunny rabbit who tells him when the world is going to end.

My favorite movie of all time! You don't have to understand it to love it. No movie like it had ever been made, and nothing like it ever will be. Anyone who loves a good science fiction and/or mystery film would love to see "Donnie Darko." And ladies, it's got Jake Gyllenhaal in the leading role.

The demon bunny rabbit. The film is about a movie of a teenage boy who sees an imaginary six foot tall bunny rabbit who tells him when the world is going to end. This movie has good story and a good cast.

One of the oddest and weirdest movies I have ever seen, but I love every second of it. The best scene of the entire film and one of my favorite movie scenes ever, the dinner scene.... "You are such a fuckass." Did you really just call me a fuckass? You can go suck a fuck." .......What's a fuckass?"

You know when a movie comes along that makes your jaw drop in the ending because you finally understand what you've been struggling to understand the whole movie?
Yeah, Donnie Darko is one of those movies.

Richard Kelly should make films more often. I know his last effort 'The Box' was not a large success, but I think he is an amazing screenwriter and director.
I loved everything about Donnie Darko. Its immature humor, its time travel, its characters, its cinematography, its acting, everything.
There's not a single loose end in this film, I simply watched everything fall into place exactly as I wanted it to. And it makes sense! The laws of physics and time travel can be confusing in other films, but here it's clear.
I really wish this film had been nominated …

A dysfunctional teenager (Jake Gyllenhaal) escapes a freak accident (an airline turbo-jet crashing down on his room) and is plagued with visions about a giant bunny named Frank who persuades him to commit crimes and tells him that in 28 days, 6 hours, 42 minutes, and 12 seconds the world will end. The film is so ambiguous that one must make his or her own mind up as to the film's proper interpretation.

Jake Gyllenhall, is great in the titlular role, at times creepy, evil, heroic, psychotic, hypnotic, confused, introspective and so on. Also starring Patrick Swayze, Maggie Gyllenhaal, Drew Barrymore, Seth Rogen and Noah Wyle. And of course the music is fantastic. This film made Gary Jules famous for classic "It's a mad world" song.

A thought-provoking movie that I will no doubt have …

Emotionally disturbed high school student Donnie Darko narrowly avoids death when a six foot rabbit called Frank lures him from his bedroom and tells him that the world is going to end in 28 days. Donnie Darko is one of those films that deeply divides its audience as it is most definitely not for everyone, leaving much of what occurs open to the viewer's own interpretation. My own personal spin is that it is the anti-Capra; "It's A Miserable Life" if you will. Donnie is given a snapshot into the what the world would be like if he continued to be in it, and he doesn't like what he sees. A dark fantasy that makes Tim Burton's visions look like Mary Poppins, it's Back To The Future made by David Lynch. It was the film that catapulted an intense Jake Gillenhaal to stardom as well as …

No posts have been made on this movie yet. Be the first to start talking about Donnie Darko!