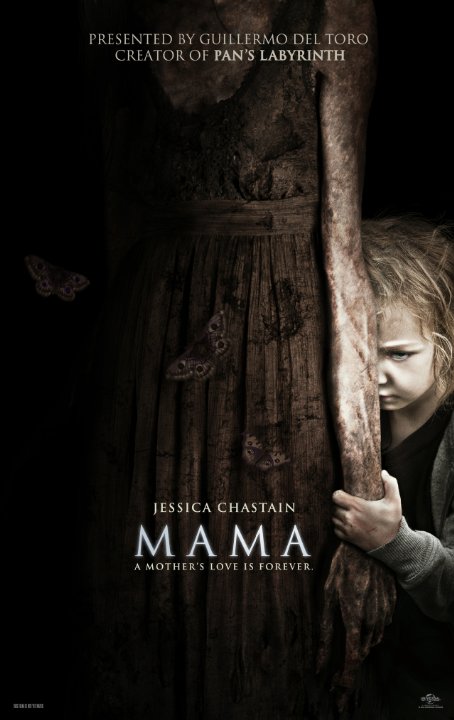 Plot: A couple are the only living relatives of nieces who were left alone in the forest for five years. Yet after they take charge of the girls they find out maybe they weren't alone after all... -- Chris Kavan

"Mama" isn't in any way inventive. It's also not scary or memorable.

Not going to lie, this movie was scary at certain times. The plot is solid and it has a well-thought out ending.

It starts off good. It gives you hope. Makes you excited. And just when you start to think "This is good" it just turns to shit. The excitement disappears and is replaced by boredom and anger. They tricked you. The children was really creepy and you thought mama would be even creepier. Instead she was ridiculous. And the ending was the worst I've seen in a very long time.

A creepy movie with a very intense atmosphere

"Daddy,look! There's a woman outside the window.And she's not touching the floor."

"Mama" has all the elements to make it a great, creepy horror movie. It starts very strong with a somewhat hazy situation with a desperate father who killed his wife and abducts his children to an unknown destination. I suppose it's a family tragedy in the making caused by an economic crisis. However, the plan to kill the two sisters Victoria and Lilly goes awry after an accident in which they end up in a remote cabin in the woods. Here, the father ultimately can't carry out his act of desperation by the intervention of a blurred (as seen through the eyes of Victoria who is visually impaired) being who appears to be "Mama" afterwards .

What follows is for me one of the most impressive forbearing …

How many times we have seen a slow silent scene followed by a sudden thud of sound to scare us? Well Mama is no exception in that. There are nearly four to five scenes of such kind and we know that something is gonna come at the end of the scene. The only difference lies here, is the emotional context that Sinister lacked. Thanks to the director for this. Well, it might sound crazy to get to the basics here, but as a movie it wins over Sinister. Not the definite thrills, nor the best plot here. But the old school thrills are intact and the ghostly imagery is quite good, if not the best.

Jessica Chastain, is taking a role so different after she had to hunt down Osama Bin Laden. She is playing an adoptive mother of two children. Well, this sounds alright. At first she is not willing to, …

Two young girls are living for five years alone in a house after their father and mother have "died". Now, their uncle(Nikolaj Coster-Waldau) and his girlfriend (Jessica Chastain) want to take the children to them and take care of them. But they are not normal. They are very often saying "mama". A doctor tries to find out what or who "Mama" is...

The movie is written and directed by debutant Andy Muschietti who has made a short film with the same name Â´(MAma) and for his first time as director he has done a damn well job. The direction is almost perfect. As screenwriter he should take some practice, though. The script is very confusing. VERY confusing. Moreover, the dialogues sound weird.
The movie is produced by Guillermo del Toro(Pan's Labyrinth). Why didn't he said something to …

No posts have been made on this movie yet. Be the first to start talking about Mama!