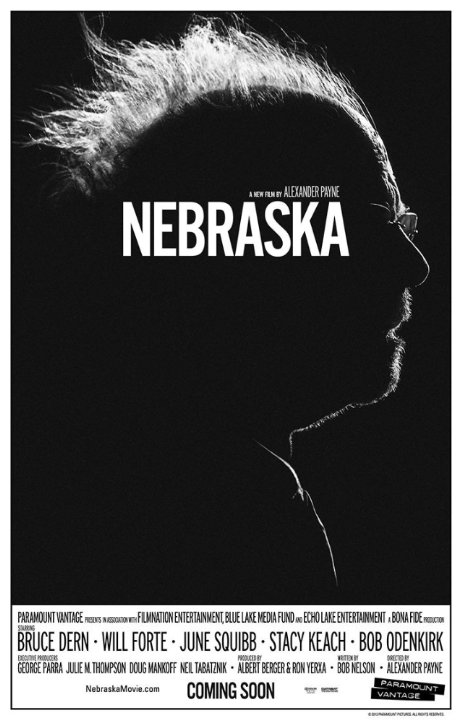 Plot: When a booze-addled father receives a sweepstakes megaprize notice in the mail, his dreams of riches send him on a trip to Nebraska with his none-too-eager estranged son. -- Chris Kavan

A beautiful story with excellent performances from its cast, especially from the hilarious scene-stealing June Squibb.

When a booze-addled father receives a sweepstakes megaprize notice in the mail, his dreams of riches send him on a trip to Nebraska with his none-too-eager estranged son. The acting, the cinematography and the directing is outstanding and out of this world fantastic.

An elderly man from Montana receives a marketing mail shot that announces that he's "won" a million dollars, so his long-suffering son agrees to take him to Nebraska to claim his prize. Another comic character study from the writer-director of Sideways, Nebraska is a portrait of working class, small town America in which the family cope with the idiosyncrasies of a typically stoic, hard drinking working man. It takes a similar concept to The Straight Story and makes a buddy road movie during which a son comes to terms with the father he has never really known in a lightly comic way. I'm sure there are many who will recognise the character of Woody and Bruce Dern plays him to perfection, supported by a fine cast of quirky characters, including Will Forte as the son trying to bond with a …

A Different Kind of Road Trip

Although I think the depiction of small-town Nebrasaka life is taken a tad bit too far (the black and white makes it seem all that more bleak) - it's not that far off the mark (and I should know, I'm pretty much a life-long Nebraskan here). What Alexander Payne always gets right is his characters - and he hits another home run here. Bruce Dern is simply perfect as the elderly, somewhat confused and alcoholic Woody Grant. He has received and (obviously scam) notice in the mail that he has won $1 million - and he only has to get to Lincoln, NE to claim his prize. His wife, Kate (an equally impressive June Squibb) is fed up - as he has been leaving the house and trying to walk his way from his home in Billings, Montana to the Cornhusker state.

His quiet son David (Will Forte - proving he …

This is a pre-discussion.I haven't seen this movie - but it's not because I don't want to. In fact, I spent several hours tracking all of the possible places it was playing. I live in Wisconsin. The closest theater I found was Omaha, Nebraska. Why do I want to see this movie? Because it is one of the few movies where my husband and I meet. We've enjoyed Fahrenheit 9/11, Life Is Beautiful and GasLand together. He likes slapstick, humour, animation. We both like science fiction but never the &hellip;