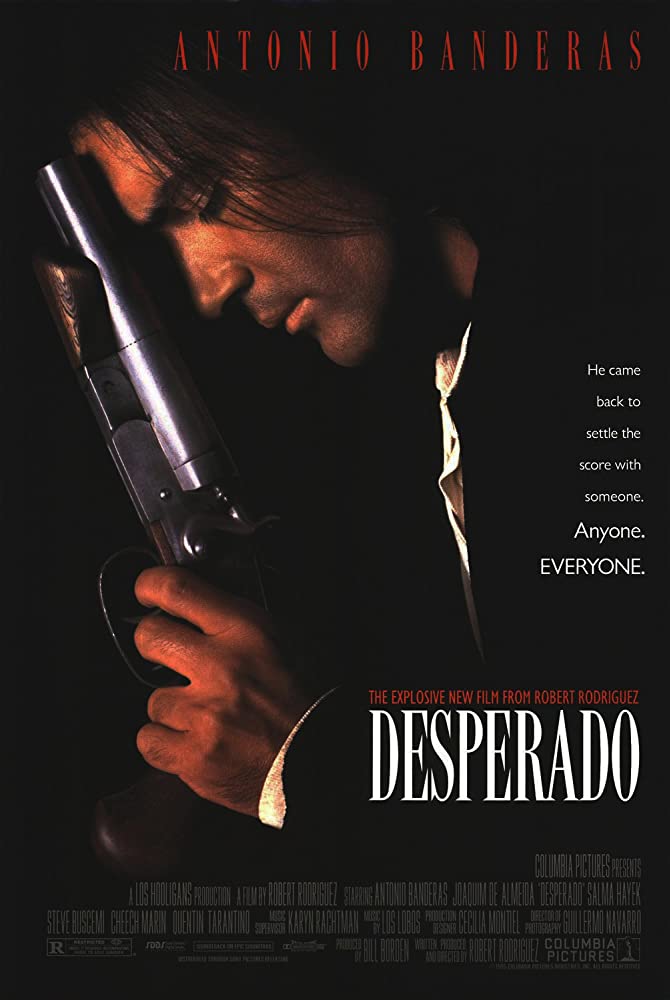 Plot: A traveling musician is once again mistaken for a hit man and gets embroiled in web of drugs, violence and saving a beautiful woman. The bullets will fly leading to the ultimate one-on-one showdown. -- Chris Kavan

With a bigger budget, Robert Rodriguez is able to fit more extended action sequences, gunfights, and explosions into his sequel to El Mariachi, but still maintains the same gritty feel. The film may be even better and more complete than El Mariachi and is, throughout, an exciting and dynamic film.

El Mariachi (Antonio Banderas) meets Carolina (Salma Hayek). The concept was fresh but the execution at times exaggerated. Some action and coincidental scenes were at time ludicrous that one can't help be baffled. Score, direction were cool and acting decent. Banderas was believable and Hayek supports well, which shows their complimentary aura on screen. Action only picks up when El Mariachi ejects two guns from underneath his sleeves. Desperado is a fun crime flick that doesn't need to be taken seriously.

Who thought this up, an 8 yr. old boy? Entertaining between cringes.

Antonio Banderas takes up the mantle of the wandering mariachi hunting the drug dealer who murdered the woman he loved and ruined his life. Although Desperado continues from where El Mariachi left off, it's more a bigger budget re-invention of the original than a true sequel, in a similar vein to Evil Dead II. With more resources at his disposal, Rodriguez fulfills all the potential of the idea, with some fantastic John Woo influenced action sequences which have a kind of ultra violent dance choreography and employs his now familiar ensemble cast including Cheech Marin, Quentina Tarantino, Steve Buscemi and Danny Trejo. Banderas has never been cooler, Salma Hayek never more gorgeous, and it's a sexy, stylish and hugely entertaining left-field shoot-'em up with just the right amount of …

No posts have been made on this movie yet. Be the first to start talking about Desperado!