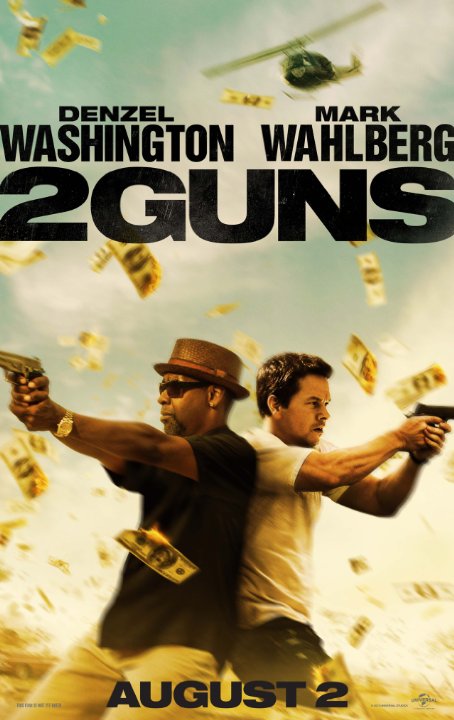 Plot: A DEA agent and an undercover naval officer find themselves investigating each other only to find it is a setup by the mob - the organization each man believes they have been stealing from. -- Chris Kavan

The title says 2 guns well I give this more then two. This movie made more money then the smurfs 2 well I can say thank god. The movie has some funny parts and the main two guns in this movie are good.

It was funny, suspenseful, and dramatic. I'll never wash my belly-button the same way again!

What upsets me is that the only guys that are putting any work into the movie are Denzel and Marky Mark. Their chemistry is excellent, because they are two top-billed actors who know how to make it work, even when they have to juggle back and forth this recycled dialogue.
Bill Paxtonâ¦ When I exited the movie, I remembered: Oh yeah, Bill Paxton was in this movie. That's how forgettable he is.
The direction by a man who's name I cannot pronounce is …

Gunning for Some Decent Action

The success or failure of a film with two big names depends on how well those stars mesh. If it's a romantic movie, the man and the woman have to have chemistry. If it's an action movie (like 2 Guns) there still has to be that chemistry in order for it to succeed. Lucky for us, Denzel Washington and Mark Wahlberg are completely in their element and they play off each other so well that it makes for interesting, exciting adventure.

There are so many double-crossing, back-stabbing moments in 2 Guns, you many wonder who you can really trust... ever. What begins as a simple bank heist to get back at a Mexican cartel kingpin soon spirals into a much larger conspiracy involving the DEA, the U.S. Navy and the CIA. There are a lot of players here from Edward James Olmos (as the craggy …

No posts have been made on this movie yet. Be the first to start talking about 2 Guns!