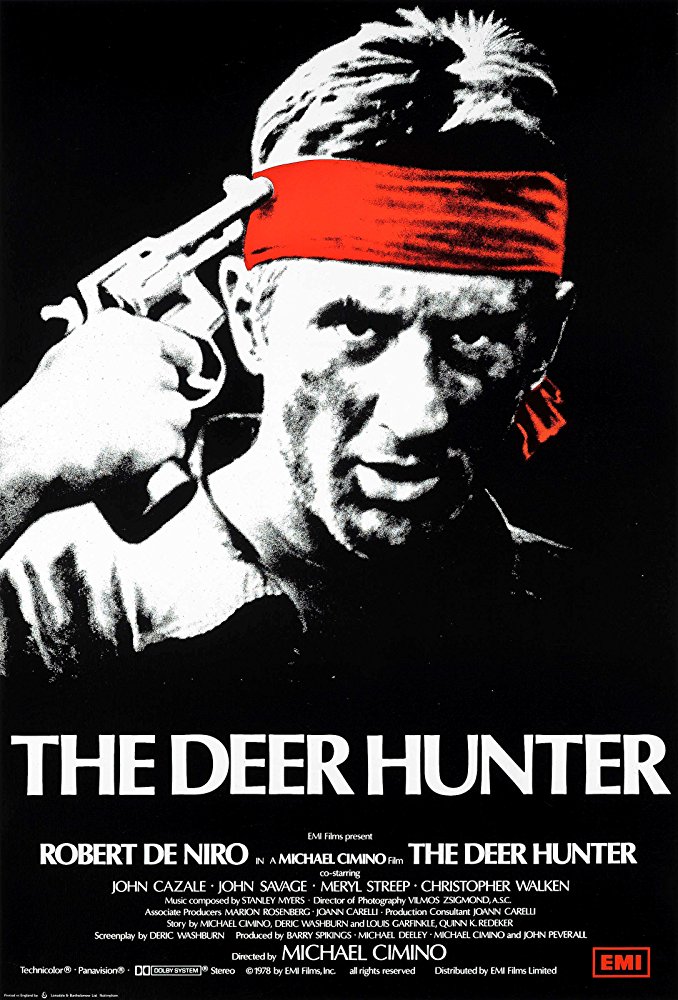 Plot: A bunch of hunting friends must go to Vietnam, who are all from a small town, change, and don't come back the same.

In 1978, this powerful film showed a side of the Vietnam War most Americans never saw possible.

Although the scene setting is a little over long, this is still a remarkably powerful war film that studies the impact of Vietnam on a group of smalltown friends at a very personal level. Uniformly excellent performances, especially by the haunted Christopher Walken and an unforgettable climax.

This is a great movie, but it's hampered by a painfully long run time. Cutting the wedding reception scene by about 30 minutes could move The Deer Hunter into my top 50, but an hour long first act (prologue?) is just too much to make this movie one of my all time favorites. One of the most suspenseful movies ever made if you can make it to the second act without falling asleep. It's so good, but at the same time, almost unwatchable.

When a war leaves destruction and sadness scattered worldwide, there are human responses. Leaving aside political manifestos and such, art, literature and cinema are the most common trends of expression used. If you asked somebody during the 70s "Hey, do you know Michael Cimino?", they would reply negatively. However, if your second question were "Have you seen The Deer Hunter?", you would most probably receive an emotional answer.

The Deer Hunter is a straightforward masterpiece, very complete from three different points of view:

1) Character development. The magnificent cast helped a lot.
2) Extraordinary direction and storytelling, focusing on all the aspects and assigning each and every one of them the same weight of importance.
3) The pre-war, war and post-war chapter …

A story of friends consisting of steel workers Michael (Robert De Niro), Steven (John Savage), and Nick (Christopher Walken), with the often bullied Stanley (John Cazale), John (Dzundza) and burly Axel (Chuck Aspegren). They experience marriage, war and loss. Linda (Meryl Streep) becomes close with Michael. Various tragedies ensue and the gang still proves that their bond is strong. The locations and cinematography were gorgeous. Score was apt and performances were really professional. Aside from the lack of good editing and wasted scenes such as the overlong shots of the wedding and emphasis of the Russian roulette's. Theme's of war, pressure, sanity, inhumanity and love were tackled. Overall, The Deer Hunter can be entertaining and dull at times.

Effective although too long.

The deer hunter's success may have caused problems but that does not make the film itself bad. Yes the film is too long, and at the same time it seems a bit rushed namely how quickly they get captured and one characters insanity occurs oddly because it happens after wards but not instantly after what would cause his problems. In fact that part of the story would not have really worked well at all if the actor did not pull it off as well as he did. The rest really does work, in terms of the intensity of some seems and the emotional impact of others. It is shot well especially the hunting scenes and most of the scenes are very authentic. You care about most of the characters since it shows them before the war, and it really shows the effects of the war well except that one problem. …

No posts have been made on this movie yet. Be the first to start talking about The Deer Hunter!