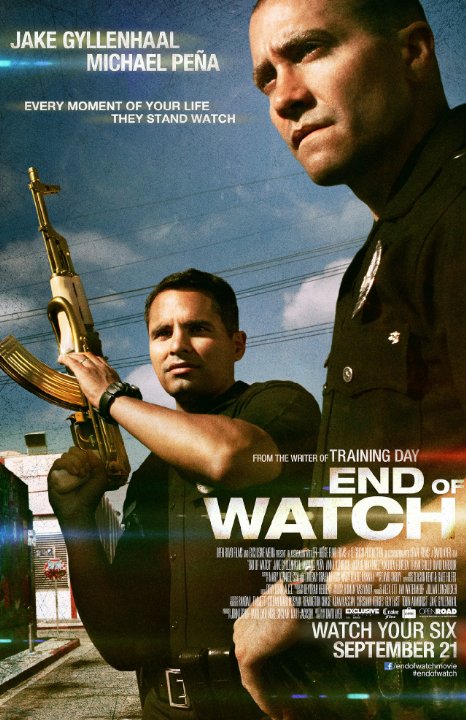 Plot: Rookie cops Taylor and Zavala patrol some of the roughest streets in L.A. - using a variety of hand-held footage - from gang member's and police dash cams - the audience is given an intimate connection to the gritty drama. -- Chris Kavan

This was a good movie that had my attention right from the start till the very end even though some of it was just way too real for me & painful to watch (Especially the final scenes) I almost wanted to turn the movie off but It's kinda like I wanted to get it over with because I knew after I watched it all, I never want to watch it again.It's a movie I'd tell anybody that was thinking about watching it to go see.It's a good movie but after you watch it once, You might not want to ever watch it again, It's just way too real & painful at times

I really really liked the opening scene. But I guess the film is not as intense as it tried to be, there are some unrealistic scenes and I wish they could have utilized that camera Gyllenhaal was holding throughout the film. I always love Michael PeÃ±a as family-man cop.

Rookie cops Taylor and Zavala patrol some of the roughest streets in L.A. - using a variety of hand-held footage - from gang member's and police dash cams - the audience is given an intimate connection to the gritty drama. Okay this is going to be a short review for this movie so let's go.the acting is good and I like that it is a found footage movie.

"End Of Watch" by Yojimbo

A pair of L.A. street cops have their hot shot reputation tested when they stumble upon a Mexican drug cartel operation that is more brutal and ruthless than anything they have previously encountered. Another trip through the looking glass of gangland Los Angeles from the director of Training Day, End Of Watch is a similar cocktail of gang bangers, street crime and gritty drama all filmed in a documentary style that owes much to the YouTube generation. The crux of the drama in Training Day however was the antagonism between its protagonists but in this film the story is so eager to present the likeable pairing of Gyllenhaal and Pena as "the good guys" that the first half of the film is like a cross between an PR video for the LAPD and a bromance. By the finale, the directorial style has …

"Let's go fight crime." It may not win Oscars or any awards, it may not even have respect from certain viewers and film critics, but for this reviewer, it was pure non-stop entertainment from start to finish. One of the best cop movies around. For additional authenticity, Jake Gyllenhaal and Michael PeÃ±a had to undergo training for their roles as officers of the Los Angeles Police Department including ride alongs 3 times a week. That's dedication to your craft and realism, including one of the best police related openings for a picture. Brian Taylor (Gyllenhaal) and Miguel Zavala (PeÃ±a) are not only partners, but best of friends who go about their day. Brian films their experience at work using a small camera and video cam.

Camera direction was not dizzying and offers some …

One of the better cop films out there.

Wow!! Yet another well written script from the director who also wrote the script for one of my top 10 all time favorite films 'Traning Day' After not seeing a good 'L.A. crime' movie in awhile i was pleased when i saw the trailer for 'End Of Watch' Finally caught the film and now i will say it holds itself well amongst many of the great cop films of days gone by. Harrowing footage delivered sometimes from video cam really shows the horrors that some of the boys in blue face in South Central L.A. and surrounding areas. The movie wasn't what i thought it would be after seeing the trailer as i thought once again it was a good cop/bad cop story such as what was depicted in 'Training Day' Both of the officers Gyllenhaal and Pena this time mostly uphold the law however in a manner that …

No posts have been made on this movie yet. Be the first to start talking about End of Watch!