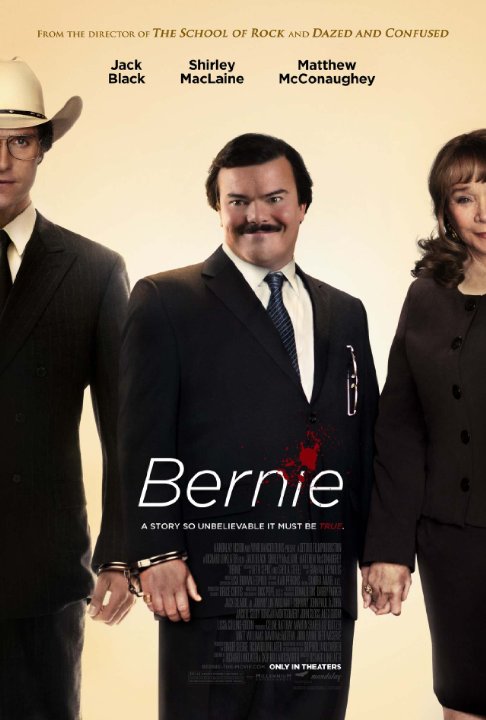 Plot: When a wealthy widow he's been seeing drops dead, a local mortician will do just about anything to convince people she's still alive. -- Chris Kavan

Jack Black is as likable as usual in this dark comedy.

just lots of different people talking about this bernie guy to a camera with boring scenes of bernie cut inbetween. jack black sure does do some bad movies. This was annoying was more like a documentary than a movie., zzz

This movie shows the versatility of Jack Black. He can be serious, too! Interesting how it was presented in a "mock-umentary" style format with fake interviews, etc. I love that it was based on a true story. Makes you think of how quickly people can crack when under pressure!

Churchgoer: "Ms. Nugent is in a deep freezer headed for Dallas!"

The story is about Bernie Tiede was one of the town's most beloved residents. He taught Sunday school, sang in the church choir and was always willing to lend a helping hand. Everyone loved and appreciated Bernie, so it came as no surprise when he befriended Marjorie Nugent, an affluent widow who was as well known for her sour attitude as her fortune. Bernie frequently traveled with Marjorie and even managed her banking affairs. Marjorie quickly became fully dependent on Bernie and his generosity and Bernie struggled to meet her increasing demands.

2011 was the year for Jack Black, Matthew McConaughey and the director Richard Linklater, because this movie was beautifully directed and acted.

Definitely one of (if not the best) acting performance of Jack Black. It takes a director with Linklater's talents to create an interesting script and the bringing out the best of his artists to make this work. Based surprisingly from a true story, it revolves around an untarnished mortician Bernie Tiede (Jack Black) who is popularly loved by his town-mates in Carthage, Texas, and a cruel old rich lady named Marjorie Nugent (Shirley MacLaine), befriended by Bernie. Utilization of the actual people from Carthage was effective to bring out the realism, though we would never know if it was Linklater's script or their feelings about the unfortunate incident. It's main strength relies on the screenplay with lines: "And in the meantime he did a lot of good for a lot of people. Till he …

Bernie is a wonderful movie. It's beautifully directed by Richard Linklater (Dazed and Confused, The School of Rock) and includes terrific performances by Shirley MacLaine and Matthew McConaughey and an Oscar-worthy performance by Jack Black. Yes, the film is based on a true story, and it's actually the story itself, well-executed by Richard Linklater, that will consistently keep you fascinated. Linklater crafts a nicely paced and directed character study that, in a way, acts as a documentary.

The script, while not being bad, has its flaws, but these characters are great. Jack Black's character is exceptionally developed with heart. He's just a great character: funny, caring, and good-hearted. You just can't possibly dislike the guy. Black's performance is magnificent, and what he …

No posts have been made on this movie yet. Be the first to start talking about Bernie!