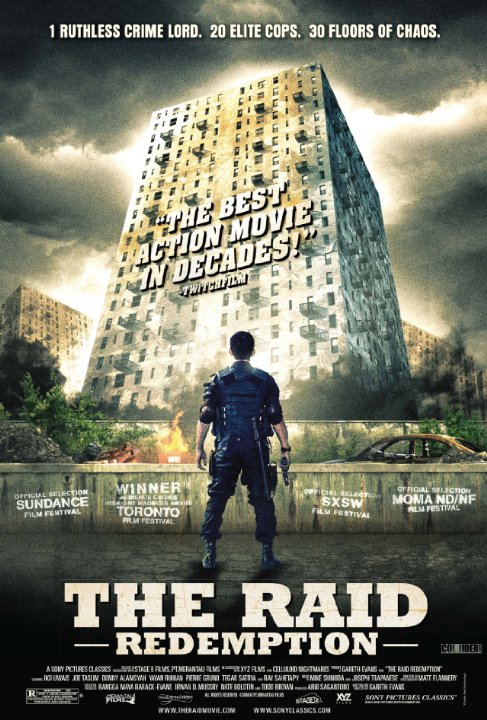 Plot: It's one man versus an underworld army when a SWAT member finds himself alone in a tenement ran by a vicious mobster and his ruthless gang. -- Chris Kavan

Only one man versus an underworld army when a SWAT member finds himself alone in a tenement ran by a vicious mobster and his ruthless gang. This movie has mind blowing fighting that never gets old and the action was shot.

Essentially, the Raid is one long action sequence. Thankfully, that's where the film excels - as it's chock full of adrenaline-fueled, brutal, poetic fight sequences and action set pieces. When the film slows down, you can see how thin the plot (and characters) really are, but the film doesn't slow down often and, as pure martial arts entertainment, it's at the top of its game.

Delivers one astonishingly brutal fight after another. The punishment is relentless and the result is great entertainment. There are some truly awesome ass-kickings here. Now please excuse me while I pick my jaw up off the floor.

"The Raid" by Yojimbo

A tactical police unit assaults an apartment block under the control of a ruthless crime lord but soon finds itself out-manned, out-gunned and trapped. The Raid is a blood spattered, bullet-riddled Thai action movie that is basically Die Hard Boiled. It takes a lot of its cues from 80s Hollywood action films and combines them with the kind of impressive stunt work and frenetically brutal fight sequences that you'd expect from modern Thai cinema. The plot and characterisation is a little simplistic but never strays too far into cloying sentimentality or dim-witted machismo and Gareth Evans' direction make up for its lack of panache with vigorous efficiency. This makes for a fast paced, action packed diversion that will never win any awards for originality, but passes the time …

Sheer entertainment from start to finish.

For a movie that has almost nothing going for it except a presentation of hyper-stylized fight sequences, The Raid: Redemption is pretty good. That's clearly all director Gareth Evans wants to deliver, and he delivers it pretty damn well, so have at it! Sit back, relax, and enjoy yourself a feast of intense, bone-breaking action scenes, riveting choreography, and blood flying out from every corner you can picture.

The story is short, simple, and to the point. An elite special forces team must battle their way up to the top floor of a large building so they can take down the evil crime lord. That's it. While it may be a little too thin, this is a good enough concept to have when you're making a movie that's cleary meant to entertain with expert action and violence.

No posts have been made on this movie yet. Be the first to start talking about Raid: Redemption, The ( Serbuan maut )!