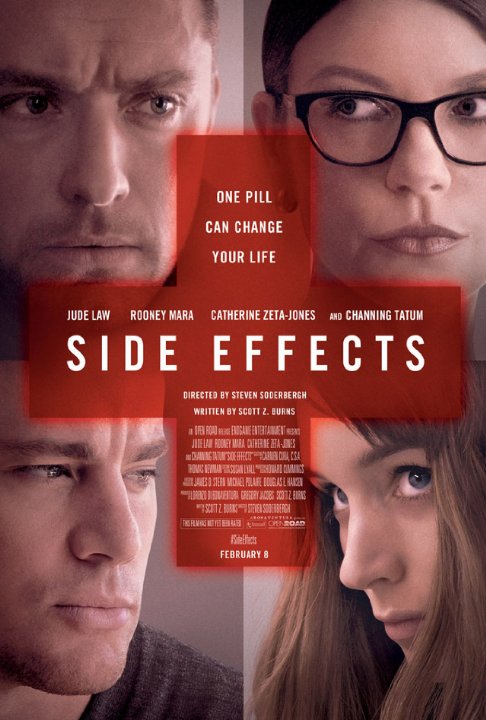 Plot: In order to cope with the impending release of her husband from prison, a woman turns to an experimental anti-anxiety drug that has unintended and dangerous consequences. -- Chris Kavan

It might offer more soft surprises than hard thrills, but "Side Effects" is a well-crafted take on the psychological legal genre.

Aided by a good cast, Steven Soderbergh channels his inner Brian De Palma in this low key but effective thriller.

Plays out like an episode of Law and Order. It should have been a TV episode and not a full length film. Just absolutely boring and pointless to the highest degree. I couldn't stop yawning and kicked myself for spending money on this.

"Side Effects" by Yojimbo

A young woman suffering from depression is charged with murder leaving her psychiatrist with the task of proving that her actions were caused by the side effects of an experimental medication that he prescribed. This psychological thriller from Steven Soderbergh is very Hitchcockian in its ambitions; the subject matter of mental illness combined with the twists and turns of a post modern thriller is very much in a similar vein to Vertigo. While it never reaches the lofty heights of this particular classic, Side Effects is smart enough to keep the audience guessing as to which way the story will weave next and has a nice sideline in questioning the ethics of how pharmaceutical corporations run their businesses and how psychiatrists are so eager to prescribe easy fixes in the form of the …

I loved this movie. Side Effects is an incredibly complex and amazingly smart thriller; because of a fantastic screenplay, the plot convincingly leads you down one path, but by the end of it all, you're nowhere close to where you thought the film was going. The film does take its time setting itself up during the first third of the film, but once the story starts to unfold, it twists relentlessly while never being entirely obvious. This is one of Soderbergh's best directorial efforts; he directs with style, the aesthetics are beautiful, and he gets some really good performances from his cast. Rooney Mara is terrific, she delves into many different levels of depression and she really impressed me my with her performance. Jude Law is also really good. I think he's a great (and underrated) …

No posts have been made on this movie yet. Be the first to start talking about Side Effects!