Seeking a Friend for the End of the World Movie Information 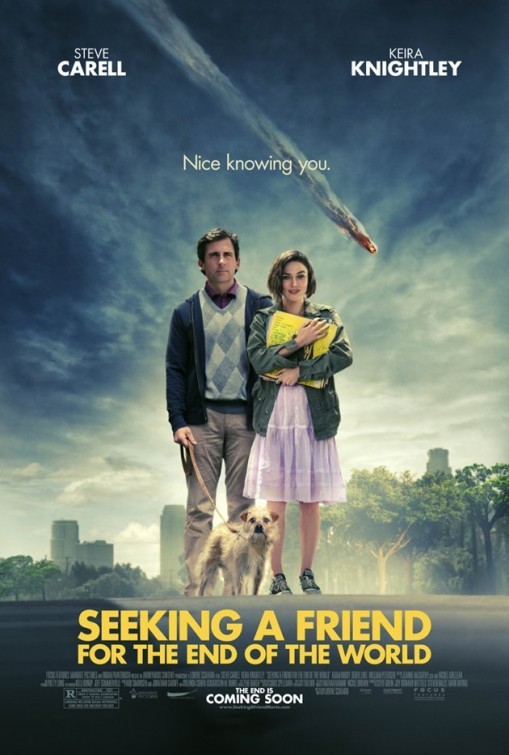 Plot: A rouge asteroid threatens earth and a man is left alone when his wife runs away in panic. Seeking to reunite with his high-school sweetheart before the end, he goes on a road trip to seek her out. Unfortunately his neighbor tags along and seems intent on inadvertently sabotaging his plans. -- Chris Kavan

I am very disappointed that more people haven't seen this movie. It is simply beautiful and moving in so many ways, and I for one thoroughly enjoyed it. It doesn't loose its potency after multiple viewings. It is a comedy, an it definitely has funny moments, but the romance and drama in the film take center stage quite early on. The relationship between Dodge and Penny, the two romantic leads, as well as the relationship between Dodge and his father, and the other relationships between characters, are compelling and relate-able, which is I think the best thing about this movie. We can all see ourselves, and how we might react in an Apocalyptic scenario.

I loved this movie. Seeking a Friend for the End of the World is one of the most criminally overlooked films of 2012. The chemistry between Carell and Knightley is really special here; they both give great performances and carry the film wonderfully. Under the direction and writing of Lorene Scafaria, this film manages to make you smile and laugh, but it also breaks your heart. The film builds perfectly to a devastating (abrupt) ending, but it's fully satisfying all the while. I cannot recommend this film enough.

I really seem to enjoy Steve Carell movies. His standard woh-me character is still enjoyable to watch, so I could totally enjoy this movie, and I did. I thought it was fun and creative. Keira Knightley was a lot of fun to watch. She didn't over-do her character which could have been very easy to do. Their chemistry strangely worked besides the large age difference. I also liked that the ending did go with ending the world instead of some miraculous turn of events. A decent movie I could find myself watching again.

"Put on some Radiohead... I want to do heroin to Radiohead."

The first 30 minutes I had to persevere and restrain myself not to hit the off-button. Everything indicated that it would be a romantic comedy, where the comic part felt pretty fake. I really can't remember me smiling in that first half hour. Maybe when Dodge's wife runs of because of his irritating dry remark about missing a turn after the news was announced that within a few days the earth would be as flat as a fig and those walking on it too of course. Afterwards I realized it was indeed funny. That woman suddenly decided it was better to spend her last days doing some calisthenics with her (I suppose) lover, then being accompanied by that dry, neurotic and unpleasant dullard.

But then it turned into a more subtle …

Seeking a Friend for the End of the World is an inconsistent, slow moving, and emotionally stale film that feels more like a dull romantic comedy than a drama. Director Lorene Scafaria tediously crafts a comedy/drama that fails at being both a comedy and a drama, mostly because the relationship between Carell's character and Knightley's character wasn't as interesting or compelling as it should have been. It has some decent laughs, but ultimately falls pretty flat. I didn't really care where the relationship between these two characters went as the world was coming to an end. To be honest, about fifty minutes into the movie I wanted the world to end already. Seeking a Friend is a mostly innocent film that might be worth a rental if you like the actors, but with a premise like this it …

Seeking a Friend for the End of the World

This rater is somewhat disappointed with Carell's choices in movies lately. Gone are the days of quality comedies such as 40 Year old Virgin and Bruce Almighty. The line that symbolizes the whole picture - Penny: "So, what are you doing with the rest of your life?" Dodge Petersen (Steve Carell) and his wife Linda listen to the radio. He accidentally meets neighbor Penny (Keira Knightley) and go off to an adventure to look for Olivia. Starts off strong but fizzles towards the constant conversations which bores the film. Soundtrack was alright and screenplay nice. This reviewer feels that Carell should selects his scripts, though he and Knightley did a good job. Had some cheesy moments and a lousy conclusion. This could have been funnier and with a better pace. Seeking a Friend …

No posts have been made on this movie yet. Be the first to start talking about Seeking a Friend for the End of the World !