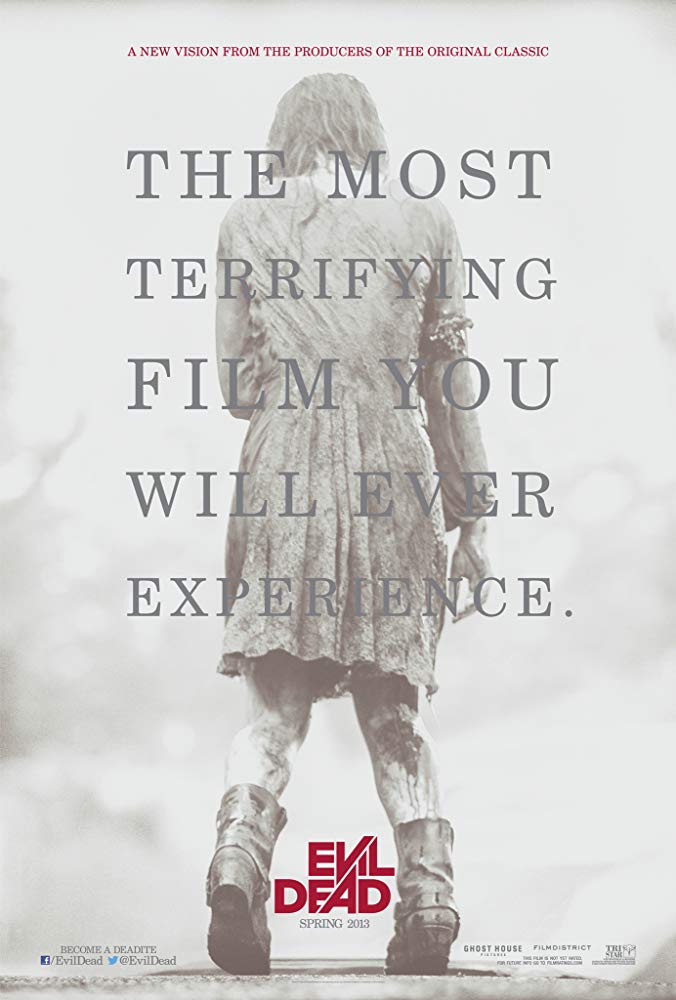 Plot: A young woman trying to stay sober joins her brother and three friends at an isolated cabin. The discovery of the "Book of the Dead" brings on horrific consequences for the group. -- Chris Kavan

Certainly more over-the-top and violent than the original Evil Dead, but Fede Alvarez is obviously a big fan as he throws in many references and call-backs to Sam Raimi's cult classic. While there is such a thing as too much blood, overall I was happy with the result. While it will never replace the original, it does well to stand on its own.

Absolute waste of time to watch. I honestly can't say much more than that.

Really disappointed with this movie, because it could have easily been great.

Admittedly this raters favorite from the franchise was the very first. It had such skillful camera direction, a likable lead, awesome visual effects (for its time/era), sweet soundtrack, immensely influential and originality. This one lacks an interesting character and after viewing the post credits seeing that awesome character say "groovy" the franchise is heading in the right direction. The realism and special effects definitely were better here since the advancement of technology and make-up. It had the gore factor of a Saw flick and creepiness of The Eye (original of course). Most scenes just make you cringe but not enough can be said with the character development and plot. The screenplay could have been better compared to its predecessor. Some noteworthy lines: …

This movie was amazing. It was horrible to watch, many times I wanted to look stop watching because it was so disturbing, but I was compelled to keep watching. Now I have used this argument against another movie before, but that was in an entirely different setting. i used this argument against Hostel, a speculative over the top violent torture feast movie. That I still belive is complete and utter crap btw. There are very few movies where people are mean to eachother in a setting that could happen that I like.This is a movie with a supernatural theme, and as long as that is the case for me the further away from reality it is, the better it is. The usual filters of acceptable violence and gore for me is then automatically reduced to practically nothing. There are a couple of laughs in …

This is the best horror remake Iâve seen in years. In a world were every half-decent horror film from the last several decades is getting a remake and/or reboot, it was inevitable that they would get around to my personal favorite Horror/comedy saga, The Evil Dead.

I was pleasantly surprised by this flick. It did a decent job of capturing some of the originals spirit while still being its own creation. It payâs homage to the original, but doesnât reinvent the wheel. Itâs really about as good an Evil Dead remake as one could hope for.

Iâve read reviews saying that this was a movie made less for the typical horror going teen and more for the hardcore Evil Dead fan, but in reality itâs somewhere in-between. There are plenty of nods to the original, and itâs a lot …

I'm guessing it will easily take the top spot from G.I. Joe.G.I. Joe was beaten by the Croods on Monday, which tells me that it's Box Office will be very front loaded. The only two wide release movies coming out next week are Evil Dead and Jurassic Park 3D. &amp;nbsp;the 3D re-releases have been getting less and less popular, as 3D tickets do the same and remakes of classic Horror flicks almost always do well (even in the face of horrible reviews) so there is no doubt in my mind that it will take &hellip;

Now that this film is going to be upon us in just a few short days - anyone venture a guess as how it will fare at the box office? Will it be able to top Mama (currently sitting at $71.58 million) as the top horror film of 2013? I have serious doubts - but at least it looks like relative newcomer Fede Alvarez has some originality left (despite the fact this is a remake). I'm still not sold enough to rush out to see it in theaters, but intrigued enough I will stream it when it comes out.

Another remake.&amp;nbsp; How refreshing, as Wayne would say &quot;NOT!&quot;&amp;nbsp; First Oldboy now this.&amp;nbsp; Isn't there any creative juices left or quality directors to produce original films?&amp;nbsp; If it's just disgusting and gory, this will never work since the original really had a good plot and overall premise.

The only thing this new red band trailer tells us is that the movie will be very disgusting and gory. &amp;nbsp;I'm still not convinced that it will be a good film. &amp;nbsp;The fact is, it's a remake and that's the reason why I still hold my skepticism. &amp;nbsp;If it gets positive reviews, I may check it out. &amp;nbsp;Not excited to see it at the moment.

The red band trailer makes me a feel a lot better about the prospects of this film. I called blasphemy on this remake as well but maybe, just maybe, this one has potential to - not top the original - but at least be a worthy tribute.