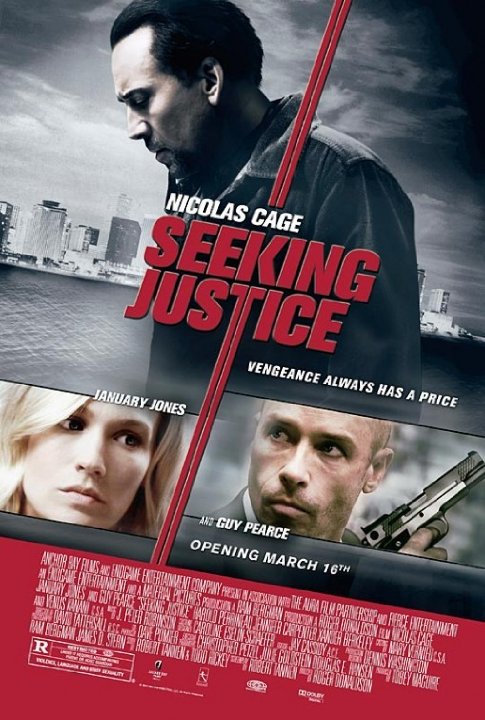 Plot: A grieving husband accepts the help of a mysterious stranger who promises to get the man who raped his wife in return for a small âfavorâ sometime in the near future.

Just a cliche movie with a good cast but not January Jones she is a awful actress.

Wil Gerard (Nicolas Cage) become involved with criminals. His wife was raped by a stranger. Poor characters development from the other background figures. Slow start then builds up then disappoints with the abrupt conclusion. some of the acting were over the top and pace was slow despite the adrenaline rush type soundtrack. Seeking Justice is an action drama which emphasizes on the latter.

This Rabbit's Left a Bit Too Hungry to Jump...

This movie presents something that I haven't seen mentioned in the reviews thus far. Vigilantism is a dangerous balance to strike, and an organization based on it has to be careful in its execution (no pun intended). The movie has some pretty deep issues that lie just beneath the surface.

The first third of the movie deals with the issue of vigilantism and revenge. When is it appropriate? *Is* it even appropriate? What do you do when the justice system fails and criminals are allowed to go free? It's something that's been debated and analyzed deeper than in this movie. And when you make a deal with the devil, are you willing to strike it without knowing the final cost?

Roughly about 2/3rds through the movie, I felt it changes the theme a bit. It becomes less about vigilantism and …

Seeking Justice is aptly named and tells the story of a mild mannered high school teacher Will Gerald (played by Nicholas Cage) who accepts an offer from a mysterious stranger Simon (portrayed by a shaven headed Guy Pearce) to avenge the brutal rape of his wife Laura (January Jones) while she lies recuperating in hospital. Simon belongs to an organization who is sick of the downfall of the hurricane devastated New Orleans and take a more direct way at punishing those who have "turned this city into hell".

There is just one catch: Though the help Simon offers is free of charge, the stranger makes it clear that he may call on Will to repay the âfavorâ sometime in the future. Having allowed Simon to âtake careâ of his wifeâs rapist, Will is now beholden to carry out a series …

No posts have been made on this movie yet. Be the first to start talking about Seeking Justice!