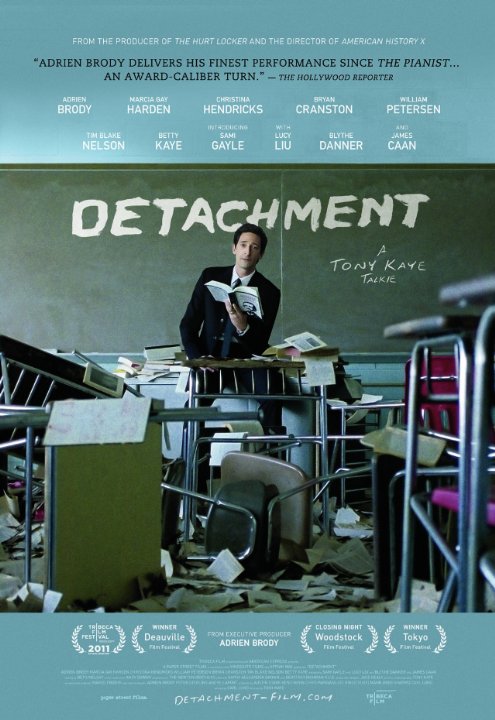 Plot: As seen through the eyes of substitute teacher Detachment follows three weeks in the life of high school from the students to the faculty and the attachments the substitute is afraid to make. -- Chris Kavan

Mr. Henry Barthes is a man who has issues and big problems on his own. He teaches in schools dealing with troubled students and teachers alike. On his way home, he also sees people struggling on their lives. He teaches these people at the same time learning from them.

***
Let me start by saying I totally underestimated this film before watching it. Firstly, the actors looked awkward playing their parts, excluding Adrien Brody but including Lucy Liu. The material was definitely good, it's just that I was looking for more. I didn't like how they concluded some subplots, and some just fine. What I really like about this film is the execution itself. It is like a documentary presenting a relevant issue. I really appreciate the cuts, it totally made the story, the message, clear to …

Poetic, moody, dark and realistic. A documentary style of filming about a substitute teacher named Henry Barthes (Adrien Brody), Erica (Sami Gayle) and other faculty members. The whole film felt too preachy and depressing. It does have some strong points and fine performances. Adrien Brody seems very sincere in relaying the message of his character. The background support was effective as well though the direction tends to go around the stories of each individual. Some memorable lines: "We all feel pain." We all have problems" "Some days are better than others" and "Where are all the parents?" Artistic, well-casted and an authentic screenplay. Detachment however is definitely a downer despite representing the business side of education, reformation, societies evils, death and bad …

No posts have been made on this movie yet. Be the first to start talking about Detachment!