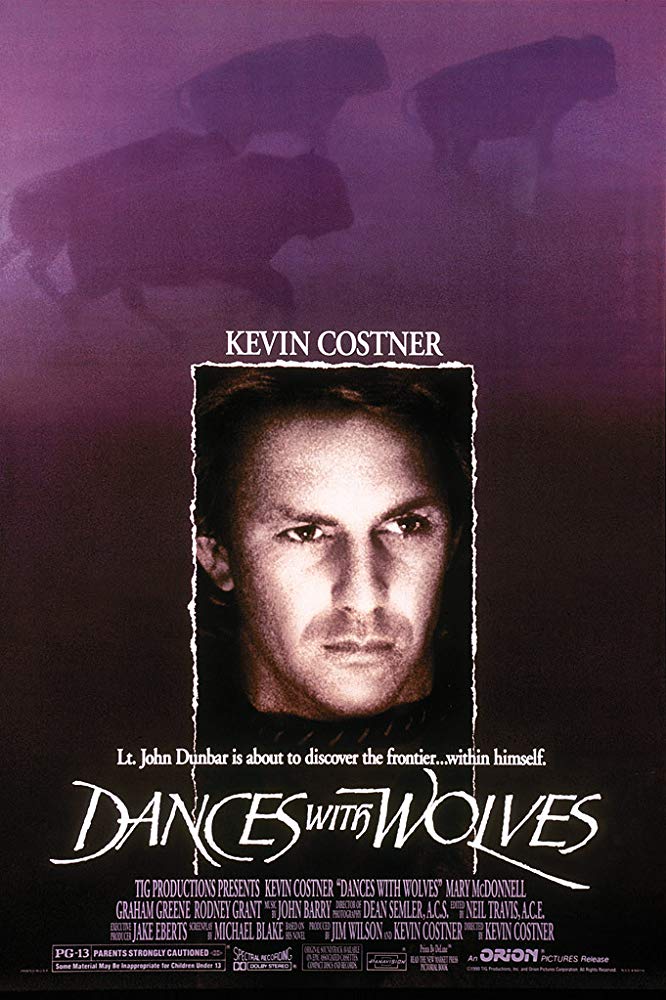 Plot: A Civil War Commander heads to the plains to settle during the civil war when he first encounters Native Americans.

Forever remembered as the self-important western epic that robbed "Goodfellas" of Best Picture, Kevin Costner's directorial debut is visually brilliant, but contains too much unnecessary VO narration and Disney-esque approaches to the themes its story tackles.

Many people think the 1990 Oscar for Best Picture should have gone to GoodFellas; I might have preferred that also, but don't discredit this film for that reason. This is a great film! Along with 92's Unforgiven, Dances With Wolves revamped the Western genre, making it popular again. Nominated for 12 Academy Awards and winner of 7, this classic film is a must see!

This is Kevin Costner's best work, both as a director and as an actor. He holds a gravity and seriousness in his eyes that is missing from his previous hokey, "everyman" portrayals. The film boasts a strong story, impressive and often beautiful visuals, and a stirring score.

Re-watching again after viewing this as a kid. The story revolves around First Lieutenant John J. Dunbar (Kevin Costner) who still hasn't found his own identity. He then meets an injured Stands With A Fist (Mary McDonnell), and returns her to his Sioux neighbors. Dunbar also meets Kicking Bird (Graham Greene) and Wind In His Hair (Rodney A. Grant). The cinematography was just gorgeous and the action sequences realistic. It had some dull moments such as the overemphasized love scenes between the Lieutenant and Stands With A Fist and the journal search. The gunning of one of the antagonists that was surrounded obviously felt choreographed. Costner had the correct decision to encourage the writer of the original script and turn it into a novel in which he acquired the rights. Had …

"Dances With Wolves" by Yojimbo

Kevin Costner stars as a cavalry lieutenant sick of war who volunteers to serve in an isolated frontier outpost where he learns to understand the culture of the indigenous native American settlement. Before he let his ego run away with him, Costner actually made a few pretty decent films. Although this is obviously a very romanticized view of the west, where the Sioux are a nation of saints and even the wolves are tamer than Lassie, it is a very creditable addition to the tradition of the great American western. At its core is a message of understanding and tolerance, and the best scenes involve Costner's growing respect and friendship for Sioux holy man Graham Greene. It has a gentle and sometimes humorous, easy going approach and a wild haired Mary McDonnell makes a much more …

A movie that works in some aspects but fails in others. Its a big epic although an epic that really lacks a plot of any great interest. There are big views and scenes of grandeur but not connected with a story of great interest. It is mostly a white soldier interacting with the Indians than joining them. They go through all the differently things they do together of varying interest. I was overly interested in this part but it was okay, and Costner trying his hardest to make 3 dimensional Indians is an attempt although not quite perfect. The Indians are still kept at a distance and maybe it would have worked better without the civil war soldier. Then the soldier show up for a big climax to show that now the Indians are 3 dimensional the union soldiers have to be one dimensional as …

No posts have been made on this movie yet. Be the first to start talking about Dances with Wolves!