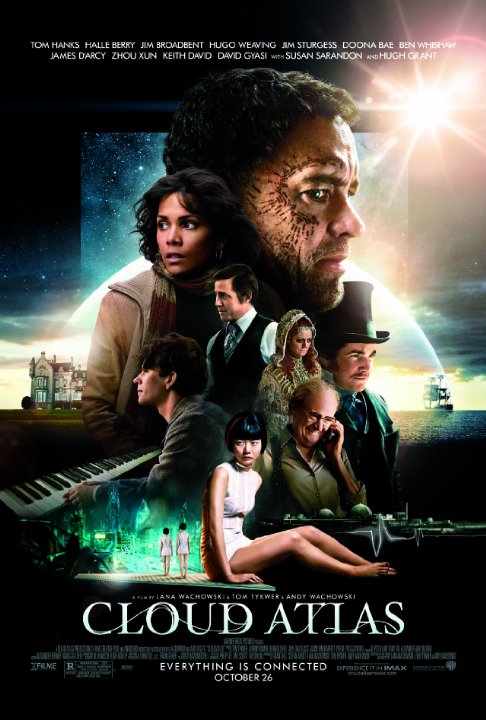 Plot: Individual actions ripple across time - past, present and future - helping one man turn from a killer into a hero and a single act of kindness inspires revolution far into the future. -- Chris Kavan

With "Cloud Atlas," the Wachowski siblings outdo themselves while not letting their ambitions escape their grasps. This bold sic-fi epic links together several stories, each with their own ideas, rules, themes, and tone, that span over the past, present, and future, and is sure to fascinate viewers with its visuals and inspired concept of past lives, granted audiences keep an open mind.

This is a very good movie. There are some glaring holes in the scenes... Why does the radar dish shoot? And what is the significance? But I love the message, tying together different stories together. Creative and solid acting, one of my favorite movies, despite the gaps in the story.

from the people who give use the matrix comes.cloud atlas.okay this is going to be a short review of this movie so let's go.the story is very hard to follow and the acting is good to.and this movie will get a 2/4 star's it's okay

The Wachowski brothers' sprawling epic tells the tales of a disparate collection of characters spread over centuries, from a murder plot on a 19th century slaving ship through to a post-apocalyptic far future. The many stories are told in parallel but share common themes and the leading actors play many different parts of different races and even gender thanks to some clever make up effects. The film weighs in at just under three hours and is very wordy, but maintains the attention as it is constantly flitting between the plots which may sound confusing, but they are so different in style and content it is actually quite easy to follow. It's not without its flaws; I found the future-speak and drawling accents of the Valley sequences incomprehensible and none of the stories have quite …

A powerful movie near perfection

It is very hard to put "Cloud Atlas" into a special genre because it has multiple elements in it. Mostly Sci-Fi, but also a bit of Drama and some Comedy as well. It stars Tom Hanks, Halle Berry, Ben Whishaw and some other good actors as well.
It is about some persons who ripple across time- Past, present and future. It is directed and produced by The Wachowskis and Tom Twyker (Perfume, Matrix, Run Lola Run)

At the beginning you don't know anything about the characters, they all seem just plugged into the movie, but time by time everything fits together. The script on the whole is brilliant written and very philosophical, though it lacks at some points. The actors all do a very good job, especially Ben Whishaw and TOM HANKS. Finally a splendid performance of him. The directing of …

"There is a natural order in this world." Various characters in different era's. The real meat aside from its stunning visual effects is the screenplay. Bountiful quotable lines such as: Sonmi-451 -"I believe death is only a door. One closes, and another opens." Dr. Henry Goose - "Our lives and our choices, each encounter, suggest a new potential direction." "Fear. Belief. Love. Phenomena that determine the course of our lives." Captain Molyneux - "When life gives you lemons, you make apple juice." A few minor qualms would be its dull pace, length, plot setting and direction. This would have been way better if it was executed chronologically (unless intended and I missed something) and better character build-up to make the film more fun to watch instead of overloading the figures …

I have not seen Cloud Atlas yet, although I plan on seeing it very soon. I don't plan on getting too bogged down with the details when I do see it, but rather see it in a very relaxed state of mind. With six different storylines merging into one, it sounds like it can get very confusing if you let it.

While reception has been a bit chilly, I'm still willing to give this a shot. The long running time may be the biggest hit against it, but it looks so interesting and original, I'm going to let it slide.

I agree with you Chris on The Matrix Revolutions, too exaggerated and forced.&amp;nbsp; Glad to see the Wachowski Brothers back in action, looking forward to this as well.&amp;nbsp; Cool update!

I will definitely be seeing this. I only have hopes that it will look amazing.

I'm still planning on watching this, even though each subsequent trailer I've seen makes it look even more bizarre. However, I like to be challenged and while I don't think this type of movie will appeal to a wide audience, I just hope all the elements come together to form a coherent film, no matter how what time period or how many different characters show up.