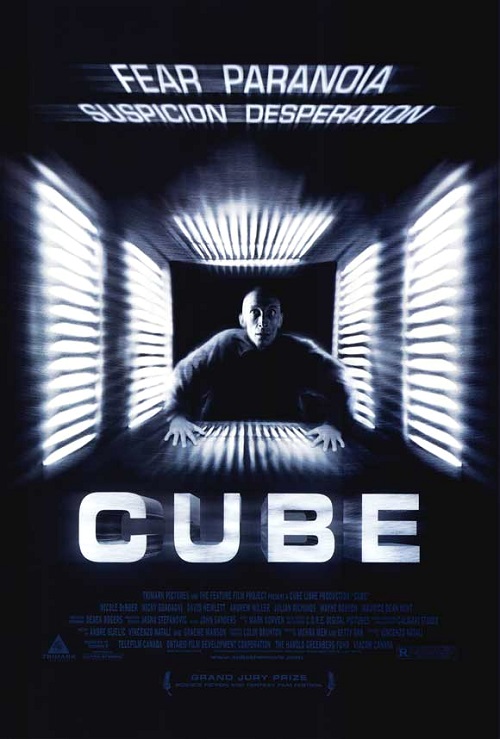 Plot: A group of six strangers find themselves in a giant cube maze filled with deadly traps. Each has a unique skill and they must work together to solve the puzzle before they turn on each other.

Cube was a very different take on the normal horror genre in my opinion. What was very different about it was the use of applying a game structure. Each character was sort of like an assigned role that needed to work together to try and survive. Along the way these characters must complete daunting tasks and obstacles. This film was more entertaining than I wanted myself to feel, but I applaud its creativity in the horror genre. Cube is definitely a film I would enjoy writing about to my friends and peers if they were looking for a new form of viewing experience. I approve of this film, and its ability to connect with the audience in a different way than usually films attempt to.

Very intriguing film. Individuals from all different walks of life brought together to solve a puzzle. There are several lessons we can learn from this film, other than the fact that math is a really useful skill. First of all, a person needs to see the big picture. The individual needs to know how their contribution will aid in the end result. Secondly, don't judge. Everyone has something worthwhile to contribute. Finally, focus on the group, not your personal problems/vendettas. Very few issues are solved individually. We need the knowledge and experience of others.

A solid low budget sci-fi that relies more on ideas and characters than action and effects. The character development isn't entirely convincing but there is some decent dialogue and the premise is initially intriguing.

Cube was an interesting film. While there were some cliche moments (jumpsuits, "angry black man character"/the "teacher"/the "intellectual",opening scene that, while thrilling, doesn't do much for the plot), the way they brought together these characters whose lives and skill sets were very different from one another demonstrates how the whole can be greater than the sum of its parts. Even though the contributions from each character were imperative, they never would have been able to make it through on their own.
What I found intriguing about this film was the sense of anxiety that it instilled in the viewer (and certainly the characters), about what may or may not be a trap, knowing that certain death could be lurking around every corner. I think this film did a good job of showing …

This movie is psychological thriller, but different than most others of this genre. It consists of 6 mostly stereotypical characters who wake up to find themselves trapped in this maze of cubes. It's basically a character study, and we see each characters' skills emerge as the movie develops. You have Quentin, (the only African American in the "tough guy" former cop role), Holloway, the woman scientist, Levin, the math genius nerdy guy, Rennes, the escape specialist, Worth, the architect of the "cube" building, and, last but certainly NOT least, Kazan, the character on the autism spectrum. They are trapped in a "hope killing maze" and need to rely on each other to try to get out. Needless to say, the least likely to survive is the ultimate survivor. We never know WHY the …

Stuck in a Cube

Cube is unlike anything I've witnessed in all my years of film viewing. The psychological trauma and uncertainty with one another that the characters face is unnerving.

What was very interesting about the film was it's originality with character obstacles. Navigating a cube maze full of numbered rooms rigged with traps is super enticing. It was like watching a reality/game show in the form of a science fiction-psychological horror thriller. The characters were extremely dynamic and comprised their own stories on why they ended up in the cube as well as possessing their own unique set of skills. However, the characters did also have some predictability. Quentin's tough bossy attitude was not surprising and his transition to controlling the others suited his character psychosis. Leaven …

No posts have been made on this movie yet. Be the first to start talking about Cube!