The Devil Inside Movie Information 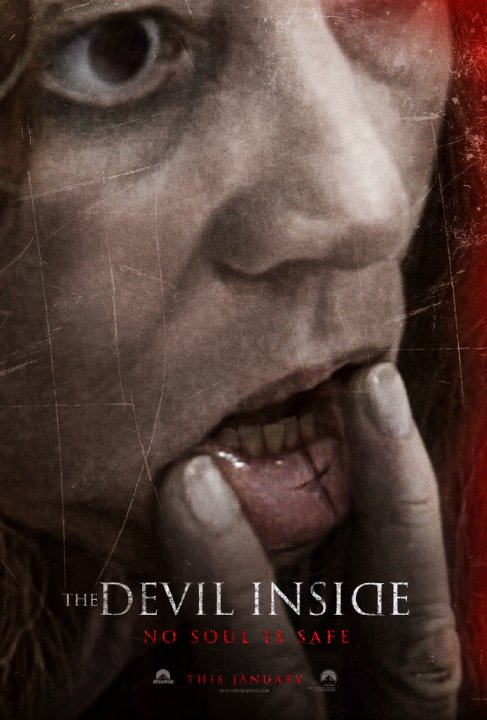 Plot: A women in Italy takes part in a series of unauthorized exorcisms in order to uncover the truth behind her own mother's exorcism, and the three murders she committed during it. -- Chris Kavan

Not good in my opinion.The best thing about it was the actress who played the mother. She was creepy. Otherwise, kind of disappointed

Like many others have said, Devil Inside is a cheap way to make money off the found footage genre with a totally generic story. In fact, other than the awesome contortions contained therein, there isn't much shocking here. The ending wasn't as terrible as I would have be led to believe, but it wasn't very good, either. One to skip.

Review: The Devil Inside

You wanna see low-rent horror filmmaking? Check out The Devil Inside, a movie that starts off promising, but falls apart after the first twenty minutes due to an overdose of "found-footage" style bullsh*t and inconsistent pacing. This is a boring movie. Flat-out. Besides a moment or two that's somewhat interesting, The Devil Inside has almost nothing to offer the unfortunate viewer who has to spend the longest 82 minutes of their life sitting through it. We see about four exorcisms in the film, and not one of them beat a single pulse. They're not remotely scary or disturbing. What I think is disturbing is that this film made it through pre-production. Here is a movie trying to sell itself as being horror, yet there isn't a moment of terror or suspense to be found. It honestly upsets me …

The Devil Inside review

An overdone formula with disturbing moments instead of entertaining and scary. Maria Rossi (Suzan Crowley) calls 911 to inform the caller of 3 people she murdered. Isabella (Fernanda Andrade) meets with Ben (Simon Quarterman) and David (Evan Helmuth) to film and learn more about exorcisms. The acting and effects were at par with Paranormal Activity. The movie suffers from its dull explanations about the topic, sequences of pointless suicide/killing a baby being baptized, disappointing conclusion and it's overall premise. One cannot comprehend how the scenes were supposedly filmed where all the characters were present on screen, maybe they have such high tech camera's that it automatically shoots. It lacks the emotion, element of surprise or even spooky details that make a horror …

A Snore of a Horror Film with a Terrible Ending

I find supernatural horror films particularly scary, so, by the very nature of vaguely following some staples of the genre, The Devil Inside is unsettling. Its premise, in fact, is a smart one, but the execution is completely routine and removes a lot of the fear potential from the film. We aren't given any time to get to know the characters, a problem which renders the chaotic final act moot (since we don't care about the characters, we don't care about the peril they are placed into.) A lot of the acting and dialogue is poor and the film doesn't really branch out in any radical direction in the genre. The Exorcist will reign supreme as one of the scariest horror films of all time, but even lesser movies, such as the Omen or even Paranormal Activity are far superior to this …

Movies I've Seen in 2012: Best to Worst by theCriticalMarisa

No posts have been made on this movie yet. Be the first to start talking about The Devil Inside!