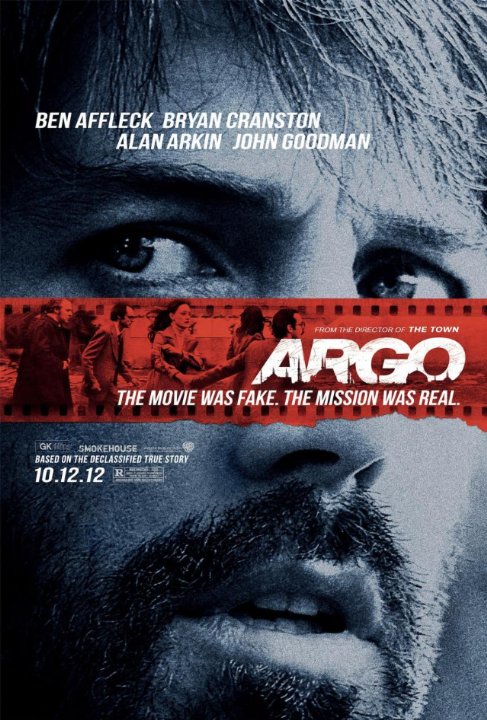 Plot: Six Americans are hiding out at the Canadian Embassy as the Iranian revolution reaches critical mass. It's up to a CIA agent who specialized in "exfiltration" to get the Americans to safety with a risky escape plan. -- Chris Kavan

Interesting, but not overly impressive. "Argo" is a largely unremarkable political thriller that inflates its own importance with historical inaccuracies.

The story is about Six Americans are hiding out at the Canadian Embassy as the Iranian revolution reaches critical mass. It's up to a CIA agent who specialized in "exfiltration" to get the Americans to safety with a risky escape plan. the title of this movie Argo sound's a bit like the movie Hugo. this is so far the best movie of the year I mean the directing and the writing is brilliant.

Argo has been sweeping up awards over the past couple of months, and it seems to be the lock for Best Picture. While I do think it is a good film, it's still nothing extraordinary. Just a simple story told well, both entertaining and informative. I can see why mainstream audiences would like it. Definitely worth a watch, Affleck has become quite a solid director, even if he doesn't have much of a unique voice as a film maker. He does know how to sustain a good amount of suspense though.

Iranian revolution explodes and six Americans managed to escape from their embassy and hid themselves at the Canadian Embassy. Soon, the Iranian authorities will figure out about this escaped Americans. Now, a CIA agent has to get them out, by faking a film production.

Wow! REALLY WOW! I did not expect this film to be this brilliant! At first I thought it would be another boring Oscar-nominee movie, but I was completely wrong! I love how the production made it to look as if they filmed it on the exact date and time of this based-on-true-story film. I felt like I was really there and was able to witness the whole thing.

The film delivered a mixture of good drama and excitement, and fun at some parts of it. Good screenplay, good directing obviously, and I should say, good …

A CIA hostage extraction specialist is called in to retrieve six US Embassy workers hiding out in the Canadian consulate in Iran after the civil uprising of 1979. Argo reminded me very much of The Bank Job, a British heist movie from a few years ago starring Jason Statham. They share a similar mix of humour, politics and history, done in a 70s thriller style format with a plots that seem extremely implausible and yet were based on actual events. Ben Affleck shows some excellent attention to detail in recreating not only the period during which they occurred, but the cultural and political climate and even casting actors who resemble their real life counterparts. The formula is almost a cross between Munich and Ocean's Eleven as the preposterous idea of faking a 70s sci-fi movie to …

Can you spell overrated? I sure hope I can because Iâm going to be using the word a lot in this review.

Argo recently won the Oscar for best picture and I canât honestly say Iâm surprised. Iâve never really been in tune with the Academyâs taste in movies, and while I did like a few of their choices (Anna Kareninaâs win for best costume design was the highlight of the evening for me,) I was a little disappointed by Argoâs win for best picture. Was I surprised? No (in fact I won a bet with my friend over it, he thought Lincoln would win,) I was just hoping that a better movie would win this year.

I liked Argo fine. It was an enjoyable thriller with some decent acting, but thatâs all. There was nothing in the film to push it from good to great. I saw the movie …

Argo just passed $100 million over the weekend. It doesn't necessarily make it a lock for the top Oscar awards, but since it has been a hit with critics and audiences, I would say it's easily one of the front-runners.

I really liked this one - Ben Affleck had good movies before, but this one was great - it better be up for some awards or I will consider it a major oversight. Easily his best film to date and one of my favorites of the year.

I have also added this movie on my watching list.

I'll finally get to see this Wednesday - though I think I'll wait until the weekend to watch Sinister (that kind of double bill is just asking for trouble). Considering the excellent word-of-mouth the film has been getting, I think this is one that will live up to all the buzz.

I saw Argo and really liked it. But, I want to see it again before I write a full review. There are a couple things I missed, and my overall reaction, while I still liked it, is kind of weird. I don't know, maybe because I saw Sinister right before it and I was tired and half asleep, but I'm probably going to see it again. I do think it's good, and Ben Afflack continues to impress me as a director.