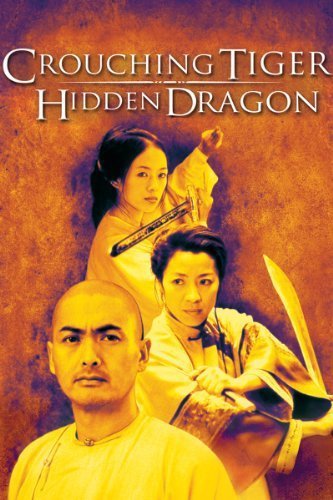 Plot: A noble's daughter is wanting to break away from her family way when she decides to reek havoc in a Chinese town with suspecting skill.

Crouching Tiger, Hidden Dragon is a beautiful and poetic martial arts film that focuses more on strikingly beautiful choreography, rather than brutal action. Each scene and shot is composed so perfectly that, even in the smallest details, there is art and beauty. To top it off, the action is supported by a meaty romantic storyline that feels genuine and complements the fight scenes.

The first of the seemingly endless wave of high flying wire work foreign films. I still consider this one the best of them.

Crouching Tiger, Hidden Dragon is one of those very few films that revolutionized a genre. The first film to gain mainstream popularity for the Asian martial arts epic with western audiences, it's a beautiful marriage of art house sensibilities and crowd pleasing action. It concerns a young woman whose desire for adventure has seen her come under the wing of a ruthless criminal named Jade Fox who betrayed and murdered the master of swordsman Chow Yun Fat. He and unrequited love Michelle Yeoh see the good in her and so try to persuade her to join them rather than fight, but fate has a different path in store. Boasting the epic scope and beautiful cinematography of the likes of David Lean combined with elegant wire work and brilliantly choreographed fight sequences, Crouching Tiger is …

The story of Li Mu Bai (Chow Yun-Fat), Yu Shu Lien (Michelle Chow), Lo "Dark Cloud" / Luo Xiaohu (Change Chen) and Jen Yu (Mandarin version) / Jiao Long (English dubbed version) portrayed by the nimble and attractive Zhang Ziyi. Due to the gender of Jade Fox, she cannot be taught the Wudang skills and is the murderer of Mu Baiâs master. The sagacious Wudang swordsman Li Mu Bai has troubles professing his true feelings and the strong warrior Yu Shu Lien who is entrusted to protect the sacred sword. Jen abuses the power of the Green Destiny and was able to fall in love with another person, despite her arranged marriage. One of a few insightful quotes: Lo â âA faithful heart makes wishes come true.â Li Mu Bai â âI would rather be a ghost drifting by your side as a condemned …

A Mudan warrior (Chow Yun-Fat) gives his sacred, yet blood-tainted sword to his love (Michelle Yeoh) in an attempt to ease his mind after experiencing a vision. He tells her to take it to a friend of his.

She, however, decides to keep it for him, and it gets stolen by a ninja. The warrior sets off to get it back, fearing it was stolen by the one who murdered his master. So he sets off to find his sword, and to avenge the death of his master.

The movie is beautifully shot, with fast-paced fight scenes. The fight scenes are simply amazing, despite it is quite obvious that the ones doing these gravity-defying stunts are in a harness and propelled by wires. If you ask me, the harness makes much of the movements very awkward and limited.

The wardrobes look very authentic, as does …

No posts have been made on this movie yet. Be the first to start talking about Crouching Tiger, Hidden Dragon ( Wo hu cang long )!