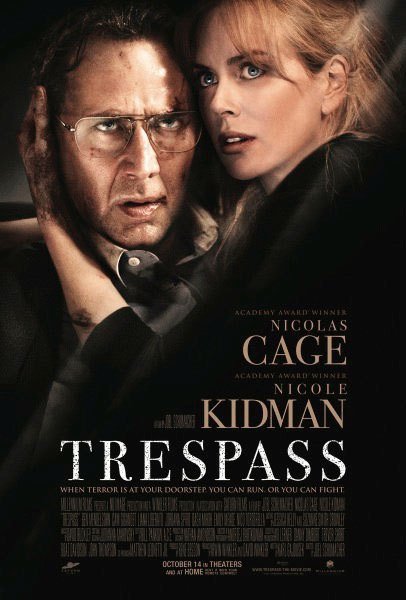 Plot: Things go from bad to worse for a husband and wife held for ransom when it turns out a simple home invasion holds divides the couple when deception and betrayal are revealed. -- Chris Kavan

Trite schlocky thriller about a home invasion gone wrong. Nicolas Cage has bad hair while Nicole Kidman has bad makeup. The villains are led by Ben Mendelsohn, years before he earned fame as a go-to bad guy for Hollywood blockbusters. Subtlety is not one of this movie's strong suits. After watching crime dramas this past week like The Gentlemen or Uncut Gems, seeing something that takes no time or thought with its plot is frustrating. But given the casting of Cage and Kidman and the unintentional humor, there's some ironic entertainment value.

I like Nicholas Cage & everything & like everybody else, I've been hearing he has been taking some crappy roles lately.I swear this has to be the worst 1.I thought Trespass was boring from start to finish from what I've seen when my eyes were open.I found Cage's character to be unbelievable & everything about this movie to be stupid

Ok i know Nic Cage loves to work...He also must love to spend his wages as this is the only reason i can see for him accepting so many god awful scripts! Being a fan of Cage's work i for some unknown reason fell i have to view everything he has done including stinkers very much like Trespass. Ok take a wealthy couple who get invaded by a bunch of thugs who like to yell and scream at each other who like to listen to their hostages which makes them scream and yell some more. I have as much of a clue on why i am watching this film as they have on how to pull a real money heist. All i have to say is during one scene a security company gets called in after a window in the Cage home gets busted gets told the password to the security system is 'diamond' yes you read right folks Cage plays a …

Kyle (Nicolas Cage) is a wealthy businessman engaged with diamonds. His family consists of Sarah (Nicole Kidman) and Avery (Liana Liberato). In most cases, well known directors get popular stars to make the picture marketable. Often times, it becomes a disaster due to the light screenplay and unrealistic dumbfounded moments. If you have a camera to see who comes in your door, would you let anybody who can't see their faces (yes even if they are cops) inside your home? Would one endanger their family by not divulging your money? Wouldn't you get the weapon of two criminals fighting? If your really loyal to your hubby wouldn't you slap some stranger who kissed rather then ask them leave? This reviewer can go on but it's up-to the future viewers of this flick to discover the rest. …

At least its not as bad as New Year's Eve

There are only two positive things I can say about this film. One, it is not the worst movie ever. Two, it's plot somehow managed to be slightly interesting, which means that I didn't hate every minute of it. Ok, now that those two "compliments" are out of the way...

Trespass is about a diamond salesman named Kyle Miller (Cage) who is having family trouble. His wife Sarah (Kidman) resents him for being away so often and paying little attention to their daughter Avery (Liana Liberato) who sneaks out to go to a party, but later returns. Things go from bad to worse when a band of thieves (Gigandet, Spiro, Mendelsohn, and Mihok) and threaten their lives.

The plot is ridiculous. The are so many twists and turns and subplots introduced throughout and it is hard to keep them all …

Movies to Watch by Omar

No posts have been made on this movie yet. Be the first to start talking about Trespass!