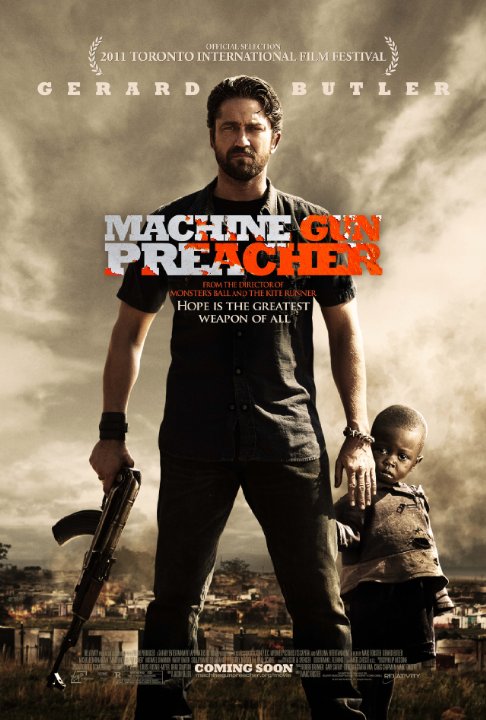 Plot: Sam Childers spent his life as a drug-dealing biker until he found God. He found a way to put his faith and former life to use by taking on the task of coming to the aid of Sudanese children forced to become soldiers. -- Chris Kavan

I don't know what I was expecting with this movie, but it turned out that it had a very serious message to tell. Gerard Butler actually shows he still has range and talent as Sam Childers, a rough man who finds his calling in helping the people of Sudan and Northern Uganda. This doesn't come without a cost, however, as he almost loses his family and his livelihood while on his quest to counter effect the devastation wrought by LRA leader Kony. It's much more powerful than I was expecting and recommended.

Silly title serious movie based somewhat on a true story , sam childers is a drug taking biker bad boy who after being released from prison and getting involved in a further incident he then finds god in the form of church and ends up going to africa to build a orphanage and save the children of South Sudan. it has a silly title but its a very serious movie. about the troubles in Northern Uganda and South Sudan ,its his methods to get the job done and his resiistance which leads hm becomes known as the machine gun preache . a thought provoking movie nicely played by gerard butler..not the gun hoe kill em mash it up movie the title leads you to belive but a thought provoking film about real events .

Why this wasn't one of the nominated best films of 2011 i dont know? Then again most of the times the fine people employed at The Academy Of Motion Arts offices don't seem to know their ass from a hole in the ground! Gerald Butler puts in a powerful performance as Sam Childers a recently released convict who as soon as he is out on parole it's not long before he is up to no good again. He then finds God. In an effort to redeem himself he relocates temporarily to the Sudan/Africa where he builds homes through a christianity group learning along the way about the tragedies on families amongst small villages in the Sudan inflicted by LRA leader Joseph Kony whose majority of his militia was put together by stealing small children from their familes in the middle of the night. Turning the …

No posts have been made on this movie yet. Be the first to start talking about Machine Gun Preacher!