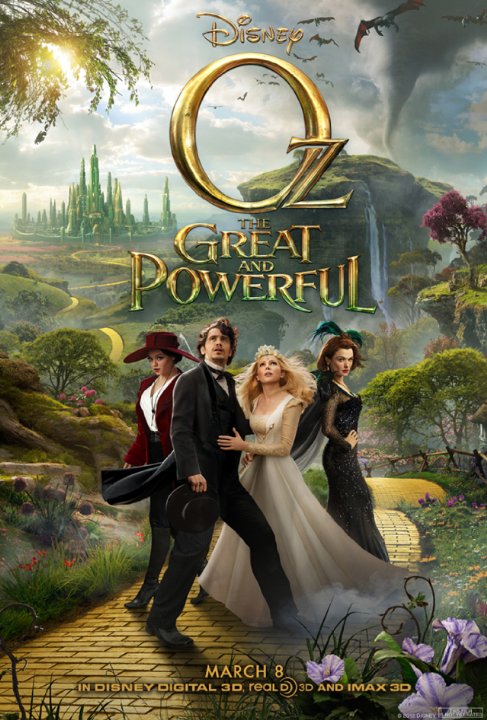 Plot: A small-time circus magician with questionable ethics finds himself whisked away to Oz where he thinks he has found his ticket to fame and fortune. Yet the newly minted "wizard" finds himself up against three witches and must decide who he can trust and how to use his powers for the good of the world. -- Chris Kavan

While it tells an interesting story of how The Wizard came to be, it lacks almost all magic from the classic film.

A small-time circus magician with questionable ethics finds himself whisked away to Oz where he thinks he has found his ticket to fame and fortune. Yet the newly minted "wizard" finds himself up against three witches and must decide who he can trust and how to use his powers for the good of the world. this movie had a lot of mix review just like the hobbit but this movie is fun as hell. I mean the 3-D was not good but the visual effect's are amazing.

The first 30 or so minutes of Oz the Great and Powerful made me hopeful that this could possibly be the first Sam Raimi film I would end up liking. Unfortunately, this feeling was short lived, as the longer the film went on the worse it got. Sure, it's pretty to look at, but do no film makers care about practical effects over hollow CGI environments anymore? Another fault is in the casting, especially Mila Kunis of whom I love to watch. What we get in the end is pure eye candy that could give you a sugar rush. But the story and dialogue is absolutely dreadful. Maybe a day will come when I actually like a Raimi film, but until that day comes he remains one of my most hated film makers working today.

Neither great nor powerful

Neither great nor powerful enough, but it has the heart at various points and the ultimate humor that works on to entertain for the final act. Director Sam Raimi, introduces the film with old and classy way , then suddenly bedazzles with rich colors and the land of Oz. James Franco was almost wasted for most of the film, with gimmick tricks , slapstick humor and most of all an idiotic and silly characterization. But looks like, Raimi has kept his best part for the last act. There is a sudden trick there and Franco brings the spark to his character, in the most entertaining way. I did not care much about the female characters. The Giant wicked witch looked sober and clumsy. The assistant is also badly shaped up. Michelle Williams who appears twice in the film, takes the leading role to …

Great? Not so much..

Everything the Wizard of Oz IS, this movie ISN'T. There's no magic and whimsy. The actors try very hard to fake innocence and to have a whimsical air about them and just come off very fake and wooden. The casting was horrible. James Franco is not a leading man. He has absolutely no charisma. And when you're playing a philandering magician, you need charisma. I didn't see a wizard or a character. I saw James Franco in a funny suit, acting like an idiot. Mila Kunis was laughable. Michelle Williams was a dufas. What happened?? Rachel Weisz was ok. The best characters were the minor ones, like China Doll and Finley and guess what? They're animated!
The only real points I can give this movie are for style. It's very visually striking, but even the effects fail sometimes. There are scenes …

awesome trailer of the movie..

I will appreciated for Hollywood Film Industry to doing a wonderful jobs. In the first show i will see this movie. I liked the theme.

It looks pretty fun. A lot of colors, cool visuals, (hopefully) decent 3D. Many younger kids will eat it all up. It'll probably perform well at the box office considering how many people love The Wizard of Oz. I have faith in Raimi, being that he made one of my all time favorite horror franchises and two great Spider-Man movies. So I really don't think it'll be bad, but I agree with you that it may turn out to be more visuals over substance.

This is probably the next film I have an inkling to watch in theaters. It reminds me quite a bit of Alice in Wonderland ( a lot of CG and taking a familiar story and &quot;updating&quot; things - even though it's technically a prequel). Still, even if it turns out to be more flash than depth, I like the actors involved and think it will be at least fun to watch.