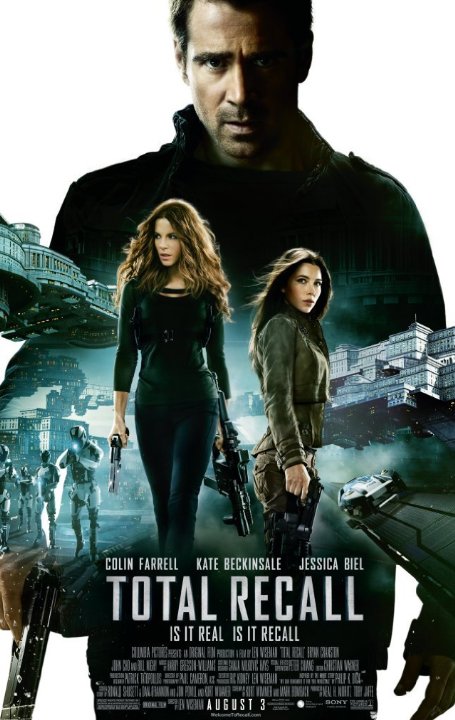 Plot: Douglas Quaid needs a vacation from reality, and when Rekall offers him that chance, he's happy to take it. Yet something goes terribly wrong, and Quaid finds himself hunted by police led by Chancellor Cohaagen and the only way to break free is to seek out the underground resistance. Along the way Quaid will navigate memory, fantasy and reality to discover his true identity in a world turned upside-down. -- Chris Kavan

Okay before I start this review I have seen the total recall with Arnold Schwarzenegger it was good and now we got the new one and I like it.the action was good and the visual effect's are great and that's it.

The movie may not be great, but it is definitely good. The series of twists and actions, PLUS the unpredictability set the movie apart from other sci-fi action movies.

A mixture of Minority Report technology/settings, Bourne like action sequences and a touch of the original Total Recall. Douglas Quaid (Colin Farrell) goes to Rekall, a company that implants artificial memories, and was accused of being a spy. His wife, Lori (Kate Beckinsale), tries to kill him after explaining his dillema with the SWAT Team. Quaid encounters Melina (Jessica Biel). The picture lacks depth, humor, emotion, clear plot andstorytelling. On a positive note, the fight scenes and chases were well done. Totall Recall is a fun action sci-fi that is well acted but lacks th charm of its 1990 predecessor.

A factory worker dissatisfied with his lot decides to spice up his life and visit a memory implant service to discover that he is in fact an undercover secret agent and wanted fugitive. The fact that I thought that the original Total Recall was a ugly, tacky, nonsensical mess means that this version had very little to live up to, and on that score it is a success. The cast is better (despite a criminal waste of the usually excellent Bill Nighy), the dialogue is better and the visual effects are a LOT better. But as he consistently proves, Len Wiseman does action. He does not "do" character development, he does not "do" sophisticated narratives. He does action. And that's it. So what we have here is a remake that stays very close to the original but dispenses with its more ambitious plot …

I think that I had a major advantage over many of the people that saw this movie, and that is that I had forgotten most of the old Total recall. I am also capable of keeping an open mind when I see a movie no matter the hype around it. The only thing I expecteded was an action movie, and that is what I got when I saw it at the cinema. Superb visual effects and good acting performances, and a couple of well timed plot twists along the way. There was no doubt who the hero was and allthough you expected, you knew he was gonna win you still rooted for him. That was not the issue, the issue was the journey and how he was going to win. If you can't seperate the two movies that's really not my problem. I saw this movie, I enjoyed it. It was a good movie.

If you haven't seen Total Recall yet 2012 or the 1990 version then most definatly go with director Paul Verhoeven's original starring Arnold Schwartznegger as the 2012 version is a very poor carbon coby with a few changes that were not made for the better. I myself am incredibly leery on watching reboots of films and Total Recall is the main reason as to why. The updated storyline is crap with the evil Cohagen this time round wanting to issue a force of his created robots on what's left of the 21st century inhabitants on the two colonies left in the world titled the UFB (United federation of britain) and the colony (Australia) (Stupid idea) . Yep no trip to Mars this time round folks (or like Arnie likes to call it Maaas) In this one director Len Wiseman still used a majority of the …

No posts have been made on this movie yet. Be the first to start talking about Total Recall!