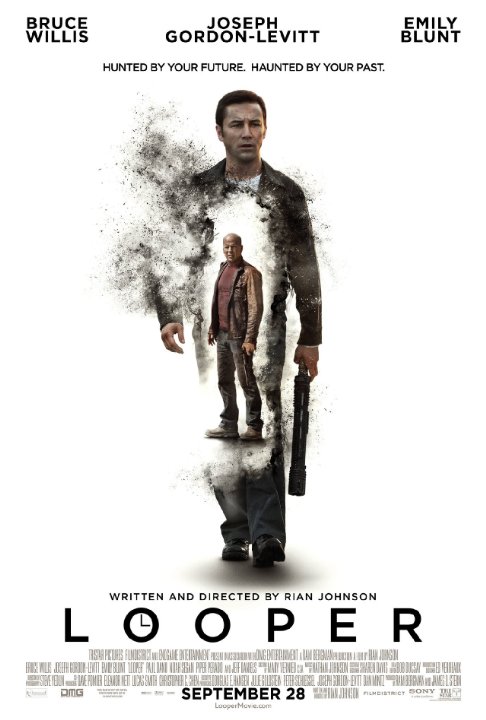 Plot: A man who works as a "looper" - a hitman sent targets from the mob in the future - realizes his latest hit is his future self. -- Chris Kavan

Dark and refreshingly original, "Looper" is excellently thought out, and even manages to be quite touching.

Will watch this movie again. First time I sincerely appreciate Emily Blunt's performance and JGL remains one of my favorite actors.

The story is about A man who works as a "looper" - a hitman sent targets from the mob in the future - realizes his latest hit is his future self. okay this is going to be a short review of this movie so let's go.this movie has good acting and great directing.

A solid and entertaining SF.

Once again a solid and entertaining SciFi.

This movie was thrilling because of two things:
- The feature of time traveling has already been used several times, but the fact that people are sent from the future and then being eliminated by a "Looper" is unique (Maybe I'm grossly making a mistake but I've never encountered this in another movie). The Looper is sent on retirement after his alter ego returns from the future loaded with gold. Tricky but ingenious.
- The acting of Pierce Gagnon as Cid is extremely sublime and at times surprising, knowing that he's still such a little fellow. Those eyes that look up at the young Joe while asking if he killed people allready. And that frenzy look at the end when confronted with BW. And such acting by a little kid. Superb.
The rest of …

Looper: 4.5/5
Short Synopsis: A hit man who kills people from the future encounters the future version of himself.

This movie is excellent in my opinion. Where to start is the question. Well for one the acting. Joseph Gordon Levitt is especially sharp playing a young Bruce Willis. He has that bad ass hit man vibe that Willis is known so well for. I believe that Willis and Levitt's ability to successfully mirror each other is a huge hit or miss shot that Johnson took with the casting and it paid off. That's one of the driving forces behind the movie. The acting that was most impressive to me was that of the little boy. The dialogue and scene with him and the math was amazingly done. It sent shivers down my spine and made me feel for Emily Blunt like I was right there. If he wasn't as …

In a future where time travel has been invented and outlawed, it is used solely by a criminal organisation who use it to "disappear" undesirables into the past where they are disposed of by hired killers called "loopers". I was very much looking forward to Rian Johnson's foray into science fiction, being a big fan of his two previous films both of which were similar genre homages. Sci fi is a rather more difficult nut to crack however, as most of the concepts it employs can be traced back to a few key examples. In this case, the comparisons to The Terminator in particular, Twelve Monkeys and Blade Runner are obvious making Looper feel a little too referential in way that Brick and The Brothers Bloom avoided. It could also be argued that its monicker could just as easily refer to the many …

'im looking forward to this movie. if its anywhere near as good as the reviews i will be happy as my type of movie.its about time something good came out its pretty dire lately quality wise

I was lucky enough to catch a pre-release screening on this yesterday and I have to say that fans of action/sci-fi should be in for a treat. While I'm not going to say it's perfect (time-travel films rarely are - too much to think about) - I think they captured the near-future pretty accurately (if a bit depressing to think about) and the whole mob-of-the-future time-travel hits was a nice use of said technology.Full review up tomorrow!