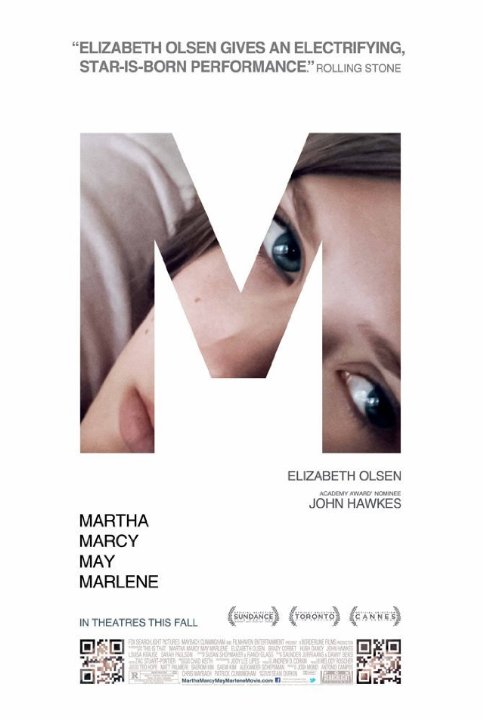 Plot: Martha has struggled to free herself from an abusive cult but her attempts to reconnect with family and get back to a normal life are constantly thwarted by her memories and increasing paranoia. -- Chris Kavan

Martha decided to leave the people whom she lived with for a couple of years. Now that she stays with her sister and trying to reconnect with her family, she struggles with the nightmares of her past. *** Martha Marcy May Marlene is another great, good, and true films recently. The whole film was so silent yet very strong on the message. The thrill comes in an extraordinary way which give the film more depth and significance. Actors delivered well and the piece, obviously not mainstream, brought something new to audience.

An okay story about a young woman who escapes a cult and tries to right her life with her sister. Through flashbacks, we see the horrors she went through as she tries to readjust to a normal life, but has difficulty fitting in and dissecting what is real and what isn't. The story is interesting enough, and the cast does a pretty good job. Unfortunately the film has an extremely ambiguous ending that will probably work for some, but just didn't for me. After investing 2 hours into a film I guess I just demand a little more resolution instead of saying "that's it?"

A decent movie that I have heard good things about. I liked the story a lot. It was unique an told well. Better than winters bone in every way. The ending was pretty dumb but at least it was not a cop out. Those that want something that is fresh, check it out.

Between two ideals of reality

Elizabeth Olsen stars in this Sean Durkin directed psychological drama about a woman named Martha who suffers from an identity crisis when she returns to her sister Lucyâs (Sarah Paulson) life after being away for two years. During that time she was part of a sort of cult, free-love hippie community led by the mysterious and radical Patrick (John Hawkes). The film was released in 2011 and received critical acclaim, especially towards Olsenâs performance. The indie produced flick is one that Iâd been interested for some time, and now that I have finally gotten around to seeing it Iâm reading to share my thoughts with you.

As I said, a lot of praise was given at the time of the filmâs release to Olsenâs performance, and rightfully so. Before this she had starred in small …

Movie was impressive as it deals with issues everybody certainly has when tries to get rid of painful memories and rise above them - but these were so extreme ones, from a cult that mentally and physically abused our heroine's innocence and will to believe in goodness. She had enough common sense to realize something is terribly wrong with them, but not enough to regain trust in her family, because she constantly avoided their efforts to get close to her. Was that a shame that didn't allow her to open herself to her sister, we won't ever know for certain - what we know is that the trauma would be very hard to cure, as well as the paranoia that seems well-founded, knowing that Patrick, the cult leader, wasn't so well-meaning and well-mannered man. I had problems with accepting her refusal …

Top 25 Films of 2011 by CarnivorousCouch

Favorite Films of 2011 by illuminaria

No posts have been made on this movie yet. Be the first to start talking about Martha Marcy May Marlene!