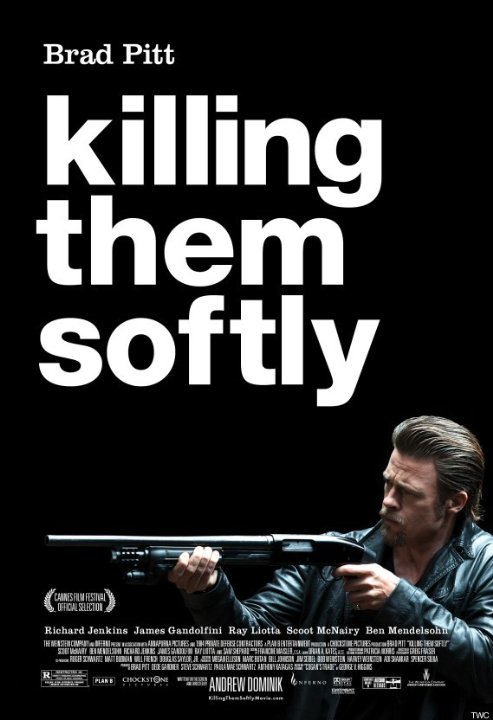 Plot: Jackie Cogan is called in when an investigation can't be handled by the law. The enforcer takes over when a heist targets a mob-protected poker game, and the stakes are high for everyone involved. -- Chris Kavan

Bold and moderately thought-provoking, even if its intended message isn't very clear.

Moved so slow, I was ready to give up halfway through. I'm sure the director was trying to make some point about the government and America or some such thing (what with all the presidential speeches going on in the background) but I was so bored I didn't even try to make the connection. Brad Pitt is good in just about everything he's in, but not even he could save this one.

"Killing Them Softly" by Yojimbo

Two small time ex-cons stick up a card game frequented by organized criminals and find themselves targeted by a mob enforcer who is brought in to investigate the robbery. Judging by the constant and heavy-handed news sound-bites centring around the recent economic crisis, Killing Them Softly is clearly making making an analogy with the US economy as these mobsters are also feeling the financial pinch. It's a very cynical and cold-hearted film that forces you to spend time with some very unlikeable and unpleasant characters, particularly James Gandolfini's burnt out hit man who makes Tony Soprano look like a loveable teddy bear. There are some nice visual flourishes and the plotting is tight and economical, being very reminiscent of a hard boiled crime thriller of the 1970s, but at the …

Could have been the Drive of 2012 but lacks the punch and appropriate direction. This had the potential of being a very good crime flick with appropriate screenplay and direction. It suffers not only because of its sluggish pace and poor screenplay, it lacks character development for a cool character such as Jackie Cogan (Brad Pitt). It also doesn't utilize the talents of Gandolfini and Liotta, who have been in very effective in a myriad of Mafia/Mob related films. it reduces them to mere mortal back-up supporting casts. Killing Them Softly may have some gorgeous moments of violence and a message to its viewers, in terms of entertainment value it just doesn't do it for this reviewer despite the earnest portrayal of Pitt and some skillful technical /stylish direction.

Impressive trailer but that's all she wrote!

Yep one star is all this gets....Soo dissapointed after seeing the trailer and thinking this was gonna be , considering the cast involved that this was going to be a movie similar to what Scorcese puts out...bzzzzz! Wrong!!! What i got was a Hunter S. Thompsonesque view on a hit between two supposed hitmen one wasnt bad a.k.a. Brad Pitt's charector however the biggest dissapointment was James Gandolfini (A quite brilliant actor in my eyes) charector who after being brought in to do a job by Brad Pitt's charector (sorry dont care enough about this film to give charector names or anything) decides he just wants to drink and abuse hookers. Ok why was he brought in special for this job again?

Boring dialogue about one sided charectors that nobody gives a toss about. Sorry but maybe i …

No posts have been made on this movie yet. Be the first to start talking about Killing Them Softly!