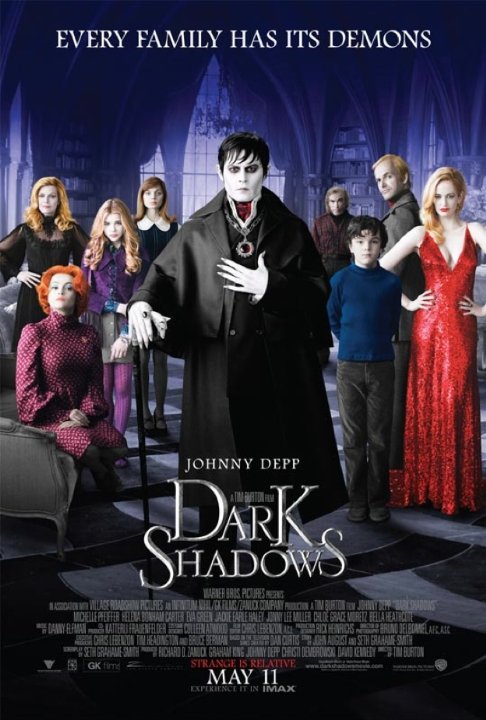 Plot: After being cursed with vampirism by a witch, and buried alive for nearly two centuries, Barnabas Collins returns home... only to find his once-grand mansion in near ruins and his dysfunctional decedents in nearly as bad of shape. -- Chris Kavan

It's a creative adaptation, but when it comes to its genre and tone, "Dark Shadows" is very confused.

Johnny depp in a Tim Burton movie well nothing new here.Tim Burton's dark shadows. so after watching the movie I felt I was in Tin Burton land you know everything is dark and weird.the movie was just not that funny some parts in the movie was kind of funny and that's it.

I thought it was one of Johnny Depps best ever, I really enjoyed it

Before there was âTwilightâ; before there was Buffy; and before there was Anne Rice; there was Barnabas. Dreamed up (literally) by creator, Dan Curtis, the original dark, gothic serial cum soap-opera had a television run of about 6 years back in the late 60's. I guess I wasn't the only teenager running home after school to see what dreadful events were befalling the residents of Collinwood. Despite the failure of a 1991 reboot, Director, Tim Burton, had decided he would like to do a feature film that played off the original cast and story. Enter his favorite choice for leading man, Johnny Depp (himself an avowed âDark Shadowsâ fan) and you have the initial ingredients for this movie.

I was hoping Mr. Burton's effort would reflect some of the gothic horror of the original …

An 18th century aristocrat is cursed by a spurned lover and awakens as a vampire in the 1970s. Tim Burton returns to his familiar formula with his usual ensemble collaborators in a film that draws very much from the teen Goth playbook. Based upon a TV series I have personally never heard of, Dark Shadows is a reasonably entertaining time jump comedy with many of the usual stranger in a strange land gags shamefully plundered. As is always the case with Burton's films, it is a treat to look at and the tone is suitably playful and irreverent. The script, although always mildly entertaining, is never really laugh out loud funny and relies too much on cliche and jokes that feel a little tired to anyone familiar with this style of film. The romantic element also doesn't really work and …

With a perfect cast, perfect characters, and perfect and exciting trailer what could have gone wrong? Well sadly, everything. Dark shadows is very hard to follow. Half the time, you don't even know what's going on . I don't think the characters do either. It is full of filler/fluff and way to much is going on at the same time.It is a train wreck. The set up and intro was great, but after that it went downhill. But the acting was great, the humor was great and that's what kept me going through out the movie. I think Johnny Depp, Helena Bonham Carter, and Tim Burton in collaoration are always outstanding.... But this let me down.. Only reason it gets 2 1/2 stars. This just shows you what happens when you try and take a TV series and turn into a 2 hour movie.

I don't know much about it. I know that Burton is behind it but I have lost confidence in him as of late.

I'd actually prefer that this be a full on comedy, with horror elements, because I always liked Burton's comedic films way more than his dramas. &amp;nbsp;Comedy just seems to be a strongpoint for him. &amp;nbsp;This might be the first movie of his that I have enjoyed in a long time. &amp;nbsp;Or, it could just be okay. &amp;nbsp;Either way, I'm much more interested in seeing this film.

I am more encouraged that this will be a horror/drama, since Tim Burton has a dark but comical movie for the kids this year in Frankenweenie.

I hope they do keep some darkness in a movie titled &quot;Dark Shadows&quot; and even in the most light hearted Tim Burton films, there always seems to be a sinister undercurrent running throughout. When Johnny Depp teams up with him, things seem to click pretty well, so while I'm not overjoyed by the more comedic tones, considering how much I've enjoyed most of Burton's films, I'm at least willing to give this a shot (plus the supporting cast looks superb).

I really don't believe that Dark Shadows is going to be a comedy. The trailer highlights some comedic tones, but the movie is actually listed as a horror/drama. I'm holding on to hope that this will be infinitely better than The Rum Diary or The Tourist. Also, it seems as if Johnny Depp is more at ease playing a character drowning in make-up - Alice&amp;nbsp;in Wonderland, Pirates of the Caribbean, Dark Shadows, Sweeney Todd, and next year's The Lone Ranger.