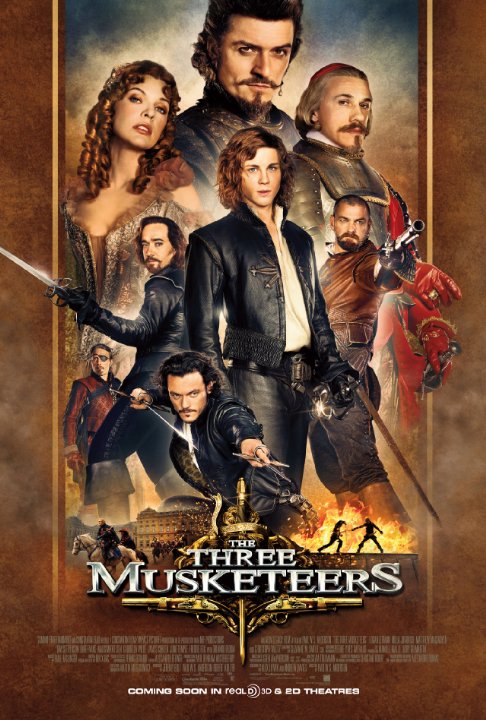 Plot: When he learns of a plot against the French throne, young hero D'Artagnan seeks out the three legendary Musketeers. Yet the three former swash-bucklers have seen better days, but to stop a duplicitous agent from seizing power and throwing Europe into chaos, they will once again stand proud and fight. -- Chris Kavan

Yet the three former swash-bucklers have seen better days, but to stop a duplicitous agent from seizing power and throwing Europe into chaos, they will once again stand proud and fight. The 3-D in the film is horrible and the directing is bad.

The Three Musketeers, Athos (Matthew Macfadyen), Porthos (Ray Stevenson), and Aramis (Luke Evans), together with D'Artagnan (Logan Lerman) try to rescue Constance Bonacieux (Gabriella Wilde) in exchange for teh stolen jewelry. Acting was sub-par, most of the dialogues were too preachy and cheesy while the romantic angle was laughable. It was baffling how many vehicles were so high tech in that type of era. cinematography and score were good, if only the fight scenes were not too hollywood-ish. The Three Musketeers doesn't bring anything groundbreaking to the table, it somewhat entertains in some ways and is a descent view for those who enjoy numbing, swash-buckling romantic action popcorn flicks.

To be honest, the best thing about this movie was the fact that the actor playing Constance was soooooo damn beautiful. I mean, she was absolutely gorgeous!

It is what it is!

This version opens with Alexandre Dumas' famous trio of swashbucklers â Athos (Matthew MacFadyen), Aramis (Luke Evans) and Porthos (Ray Stevenson) stealing airship blueprints by Leonardo Da Vinci in Venice. They are betrayed by their partner in crime, Athos's lover Milady De Winter (Milla Jovovich), as she hands the blueprints over to her partner in crime, the Duke of Buckingham (Orlando Bloom here kinda reminds me of Johnny Depp's Jack Sparrow but it's all good ). The Musketeers are disbanded by Cardinal Richelieu (Christoph Waltz) back in France and Athos and his buddies become disillusioned and bitter (especially Athos, whose heart is broken). Soon the three friends are joined by a young peasant named D'Artagnan (Logan Lerman), who travels to Paris to become a Musketeer, like his …

Almost a clichÃ©. Scenes are seen before.

With a background of betrayal on their picture, the legendary Three Musketeers, Athos, Aramis, and Porthos are again set to fix things for France. Meanwhile, an ambitious man D'Artagnan came in to Paris to pursue his dream. An adventure which started with a superfluous duel between ex-musketeers and a wanna-be continues with D'Artagnan being the fourth of the Three Musketeers.

This supposed action-packed movie lead by a young actor Logan Lerman seemed to fall short in many aspects (Honestly, I expected these). First. the movie failed to give us the great visual we hoped to see. You can see on the background set that it wasn't really going for a believable setting. Second, the movie failed to exhibit new actions in the big screen. Lastly, hmmm, I didn't appreciate any of cast's …

No posts have been made on this movie yet. Be the first to start talking about The Three Musketeers!