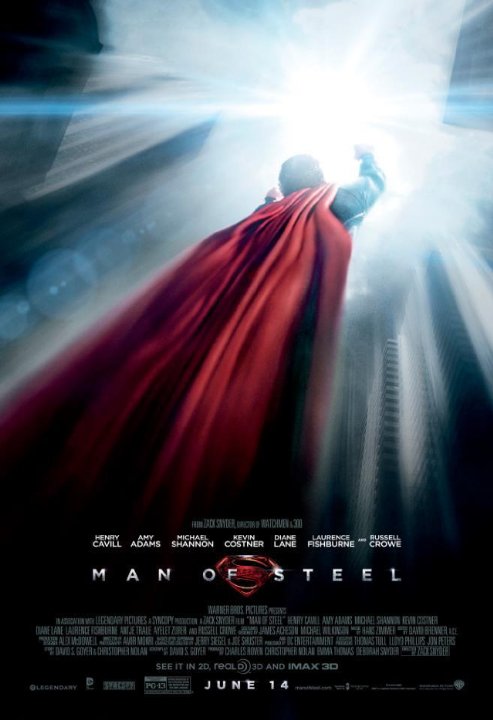 Plot: Kal-El was sent away from his doomed home planet of Krypton by his father. After crash landing on Earth, he is found by the Kent family and they raise him as their own, Clark Kent, teaching him their values. Realising he has great power among humans, Clark must now face up to his first grave challenge, General Zod, who led a rebellion on his home planet.

The first half is sluggish with exposition while the second is an amassment of chaos. But its greatest offense is trying so hard to reinvent this iconic hero that it robs the material of its classic identity, thus turning "Man of Steel" into a standard, murky blockbuster that hardly feels like a "Superman" movie at all.

Not as bad as I heard it was.

This movie is more stronger then steel. This movie was far better then superman returns, I mean the actor who played superman was really good and the score was epic.

Man of Steel is not that Super, man !

Superman never was my favorite among all the other superheroes . I thought he looked like a pussy and not just because he was always wearing his underpants in the wrong way. If you compare him with Spiderman , Batman , The Hulk , The Magnificent Seven , Dare Devil and The X -men , he is actually just a lousy figure . Most of the other superheroes have been mutated by radiation , chemical waste or bitten by a spider. Superman just crashed on Earth , got his superpowers cause gravity on his home planet is much larger and gets weaker when he comes near to a simple green luminescent material called kryptonite. As a teenager I really didn't think it was that thrilling.

I was 12 years old when I saw the first movie in which Christopher Reeve starred as Superman. I was quite impressed by …

"Man Of Steel" by Yojimbo

A super-powered alien who crash landed on Earth as a child endangers the Earth when the military ruler of his planet arrives on a war ship demanding his return. Man Of Steel is a kind of cover version of Superman II (in a similar way that Into Darkness was a cover version of Wrath Of Khan) which is an idea that actually had a lot of potential. The original film has dated quite badly and a remake done in the right way could've been great; it had strong plot ideas, a sense of humour and a brilliantly camp and disdainful central performance from Terence Stamp as Zod. Man Of Steel however, has none of those things. Although the plot takes the Superman origin story in a refreshing new direction, the plot just replaces the humanity of the character with a hotch potch of cliched sci-fi mumbo …

I loved Man of Steel. There I said it.

This is Zack Snyder's best film and one of the better comic book movie reboots to have been released thus far. Let's face it folks, the Superman franchise needed a good shot in the arm and who else but Snyder was good enough to do it? With Nolan as producer and Goyer as writer, I expected a decent film but nothing like I expected.
Holy shit. Henry Cavill nails it as Superman. I applaud him especially for not trying to channel Christopher Reeve as his unfortunate predecessor Brandon Routh tried to do in the earnest but boring Superman Returns. The cast is excellent all around too. Amy Adams is a much more energetic Lois Lane while Michael Shannon is just plain psycho as General Zod. Kudos to actors like Russell Crowe, Kevin Costner, and Diane Lane for …

A full-length trailer would be appreciated - I still have hopes that Snyder will be able to finally giver Superman the film he deserves. I haven't been watching the development that closely, but believe me, as soon as a major trailer is released, I'll sound off.

There isn't really much to judge in that teaser besides Cavill and the tone. I'm digging both of those. I ultimately like Zack Snyder as a director. I think his Dawn of the Dead remake is solid. I think Watchmen is underrated as hell. 300 is fine. And Sucker Punch is stupid, but watchable, IMO. I think Snyder and Nolan have some great things to offer with Man of Steel.

I'll be watching Man of Steel, regardless of the director behing the camera. I love all the recent superhero movies.

I don't think Snyder deserves all the critique that's lobbed his way. Sure, his latest, Sucker Punch, is no Inception. But then it wasn't a complete catastrophe.Still, there's plenty of room for improvement. Hopefully he utilizes it for The Man of Steel.

Brandon Routh looks the part but in just about everything I've seen him in (including his guest role in Chuck) he just doesn't have much emotional range. I can't say yet whether Henry Cavill will be a better choice or not. I'll most likely catch this - I'm hoping Snyder can indeed redeem himself.