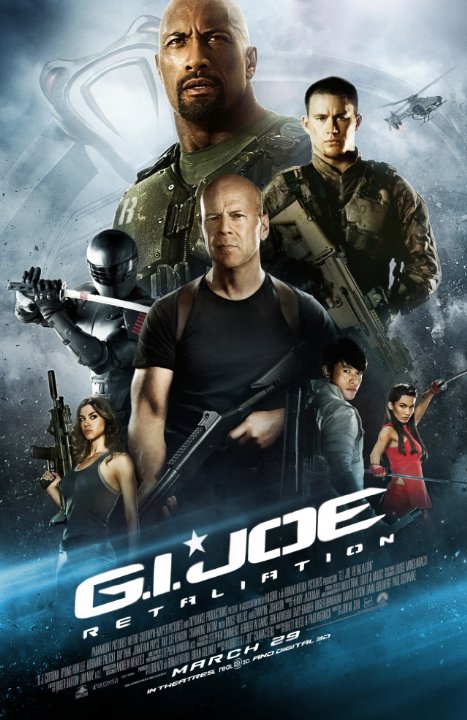 Plot: Zartan and his minions have managed to co-op some of the most influential world leaders to further their nefarious plans. It's up the G.I. Joes to stop Zartan before his plans bear fruit. -- Chris Kavan

Zartan and his minions have managed to co-op some of the most influential world leaders to further their nefarious plans. It's up the G.I. Joes to stop Zartan before his plans bear fruit. this movie is silly and the plot that goes no were but the movie is a lot of fun and it's better then the first one.

Delivers the action quotient in volumes - but pretty much everything else is lacking - like a compelling story or characters - and half the people from the first film didn't bother to show back up, either. If you're looking for a sold action film, this will suffice, but if you want anything deeper, look somewhere else.

You get everything you would expect from a movie like this: confusing/stupid plot, completely underdeveloped characters, bad dialogue and zero substance. But we all know the real reason to watch this film is to see some slam-bang action, and most of the action is pleasing in a senseless goofy sort of way. It gets the extra 1/2 star for this. Much better than 'The Rise of Cobra', but barely worth a rental at best.

Heavy loaded, senseless but Johnson is The Rock!

Jon Chu goes for the heavy loaded stuff. Johnson, oh my god, he is the best to go for the role of Road block. I felt he was awesome. Willis is far better than the Expendables part. Chu does not give the story at first, but with the wrong president (For people who have watched earlier part), world is in danger. Chu blows the entire London city as a demonstration of his plot. Nuclear free world! Really absurd, when compared to the gigantic collapse of Eiffel Tower in the predecessor. But leaving those few seconds, Johnson lives in action. He kicks, shoots and drives the Tank. Hell Yes! He is The Rock. Driving Factor: Channing Tatum is killed. Revenge!. Chu delivers the action part really well. Transformers effect: Slo-mo effects and bikes getting separated to individual flying objects. …

Poor Paris, London, and other countries involved in the film. Zartan (Arnold Vosloo) impersonates the President and his reason was "Everybody wants to rule the world." Duke (Channing Tatum), Roadblock (Dwayne Johnson), Flint (D.J. Cotrona) and Lady Jaye (Adrianne Palicki) were attacked after a mission by the "new" President. Snake Eyes (Ray Park) gets detained but unfortunately it really is Storm Shadow (Byung-hun Lee). As a kid growing-up with the toys and cartoons, its just disheartening to add new characters not in the series such as Moue, Firefly, Jinx, the Blind Master (RZA), Gen. Colton and massacring Lady Jane's name to Jaye. It was hilarious having RZA train Snake-Eyes, Firefly still being able to ride a motorcycle after being bumped by a huge vehicle and how easily the …

Better than the first but not great

I don't want to spoil anything for people still looking to see the film. This movie was a much better live action translation of the GI Joe cartoon from the 80's. No longer are the Joes superheroes running around in Halo suits but actually an elite military fighting force. The costumes were a vast improvement over the first movie, especially snake eyes, and the fight scenes were action packed. Unfortunately that is about all this movie has going for it.

It's main flaw was the story or lack there of. There are three separate story lines that the audience is constantly thrown between with little explanation or transition. It tries to tie them all together in the end but really just leaves a jumbo mess with too many loose ends to count.

The next issue was the characters. Even as a …

But I heard they're adding even more Channing Tatum - but the 3D aspect, I believe, is just an excuse for them thinking it just won't hold up against the competition. My interest was already pretty low to begin with, so pushing it that far back doesn't really make things any worse for me, anyway.

I'm okay with the pushing of the release date. &amp;nbsp;I just wish they would've put it at the end of August, or even in September. &amp;nbsp;The much longer wait will have a lot of people loosing interest in the film. &amp;nbsp;And this new 3D conversion feels like a waste.

Big news for those keeping track of summer blockbusters - G.I. Joe will not be amongst them as it has been pushed to March 2013 for &quot;3D Conversion&quot; http://www.deadline.com/2 012/05/g-i-joe-retaliatio n-moving-to-march-2012-to -add-3d-for-bigger-foreig n-box-office/It's actually a smart move - I think this year is filled to the brim with huge films and I don't think G.I. Joe Retaliation (even with The Rock) stood a chance at matching up to, say, The Avengers or The Dark Knight Rises or The &hellip;