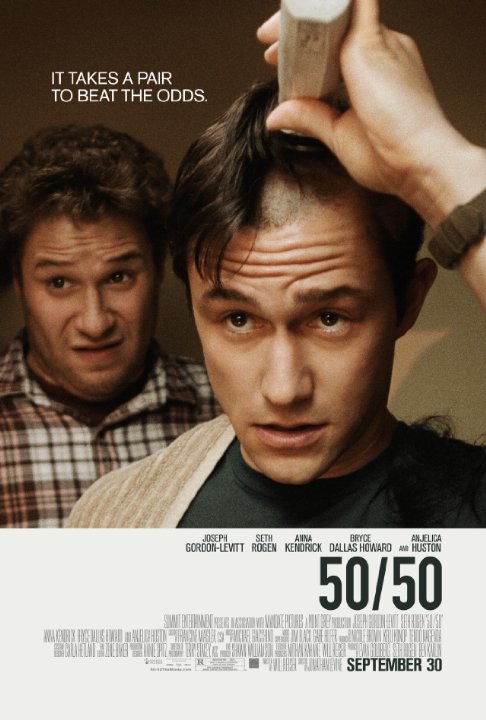 Plot: A young man is diagnosed with a rare form of spinal cancer and decides to fight for his life with the help his friend, mother and a young therapist. -- Chris Kavan

Hard-hitting as a drama, and even harder as a comedy, "50/50" deals with a relatable and tough subject, and Joseph Gordon-Levitt takes on the role with absolute courage.

Honestly, I think this is one of the best drama/comedy films I have seen in a very long time. The cast is perfect and Joseph Gordon-Levitt shines.

Great performances by both young actors. A very realistic approach to cancer with the lighthearted comical relief to ease the pain. Oh yea... someone needs to push his GF down the stairs (what a bi**h)

I never thought a film like 50/50 that has drama mix with comedy, all about cancer, could be a fantastically well done comedy with a little touch of drama that's been handle so well in this film, because 50/50 is one of the best movies of 2011.

The story to 50/50 is about a young man is diagnosed with a rare form of spinal cancer and decides to fight for his life with the help his friend, mother and a young therapist.

When 50/50 first came out back in 2011 I didn't take much notice on it, as I was only watching movies that I wanted to watch, and let's not forget I was only about 12 years old at that time, and as a brainless 12 year old, I liked Green Lantern and Transformers: Dark of the Moon but skipped this movie, and boy was it the biggest mistake of my life for skipping this …

Adam (Joseph Gordon-Levitt) is diagnosed of a rare cancer that he researches as â50/50â and informs the people he loves like Rachel (Howard), Kyle (Rogen) and his parents. He visits a psychologist Katherine "Katie" McCay (Anna Kendrick). He is 27 and divulges it to his new friends who are in chemo Alan (Philip Baker Hall) and Mitch (Matt Frewer). Rachel was late in picking up Adam in the hospital. Kyle discovers Rachel cheating in an art gallery. Adam undergoes a surgery with all his loved ones supporting him. Screenplay was radiant with the following lines: Katherine â âYou can't change your situation. The only thing that you can change is how you choose to deal with it.â Diane â âI want you to know that I smothered him because I love him.â A well casted film …

In just how many movies is Seth Rogen going to play sidekick buddy to someone with a death sentence? It seems like this movie has already been done with Funny People, but that movie was so terrible. Maybe Rogen felt bad about the direction of that fiilm and wanted to remake it. Anyway, I'll go see it if only to see Joseph&amp;nbsp;Gordon-Levitt . &amp;nbsp;