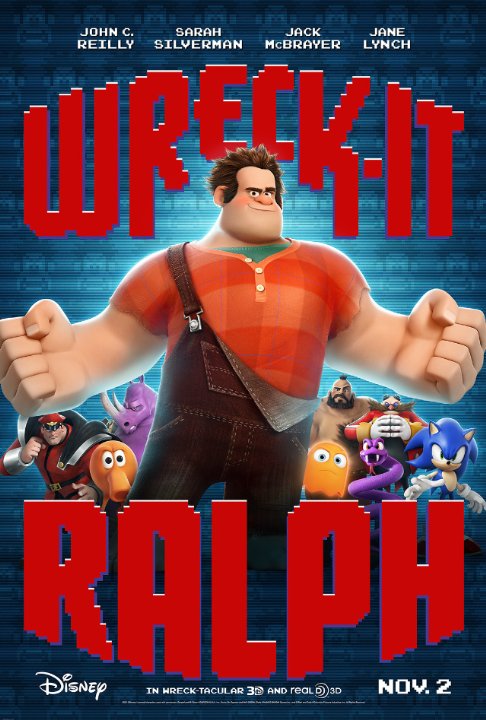 Plot: An 8-bit bad guy longs to be the hero, so to earn the medal he rightfully deserves, he game jumps to the new first-person shooter Heroes Duty but just when success is at hand, he wrecks things and winds up in the candy-coated racing game sugar rush where he reluctantly teams up with glitch named Vanellope and finds out being a true hero means a lot more than just having a medal. -- Chris Kavan

The stunningly creative "Wreck-It Ralph" has plenty of wonderful visuals, humor, and messages, while also using nostalgia and video game references to add to its appeal.

A good watch from start to finish! Brilliant concept, highly entertaining and excellent story progression. It builds up, reaches the peak perfectly and has smooth resolution. I love the songs too!

This movie was like toy story but with game characters. This is so far the best animated movie of 2012, I mean if you love video game they you are going to like this film.

I thought of giving this a four out of four. But wait I thought that the plot was looking as megamind (bad guy trying to become good). Ralph is the person who just wrecks. Oh this is the game arena and all the video game lovers, you gotta see this film. I donât personally remember Fix it felix Jr, but I do get the characters in the film. Walt Disney this time, brings us a video game film that almost strikes the bullz eye. Just a miss! May be! The voice overs from Reilly who gave for the ralph is violent, soft spoken rarely and gives the power in the vocals. I do not care much about the plot proceedings or the character development in a animated film, but Wreck it Ralph has proven miles ahead in terms of story writing and the way characters are …

Hysterical, heartfelt, and full of colorful characters, Wreck-It Ralph is a damn good movie. Will it go down in history as one of Disney's masterpieces? Probably not, however the film is charming from beginning to end without a single moment of boredom and contains plenty of video game references for the die-hard gamers. John C. Reilly, man. The guy is some kind of miraculous voice actor. He provides the voice of Wreck-It Ralph, and dare I say: he's the most lovable movie character I've seen in 2012. Director Rich Moore fills him up with plenty of heart, and the relationship developed between him and Vanellope is yet another thing that wins us over. They're hysterical together, their bond is authentic and entertaining as hell, and most importantly, you care about both of them. Put aside …

"I'm taking life one game at a time." Definitely better than Brave with its lines alone, which is probably the best animated film by far this year. One doesn't have to be a gamer to appreciate the picture since it has the sensitivity of a Toy Story and as much action similar to Kung-Fu Panda mixed wth Speed Racer. It had likable characters though improved character development would have been nice. Fun factor and videogame references were well portrayed coupled with the apt soundtrack as if you were part of the film. Wonderfully voiced especially by John C. Reilly, a fine actor in his own right. Screenplay was effective with lines: Wreck-It Ralph - "I am bad and that's good. I will never be good and that's not bad. There is no one I would rather be than me." "Turns out I don't need …

This weekend I have planned. Thanks

Oh man, if you haven't seen this movie yet, you are totally missing out. Probably the most fun I've had at the movies all year - I liked it even more than Brave.

I'm looking forward to watching this over the weekend. I think there's a good chance this could be a video game movie that will actually turn out well. Sure, it's not based on an actual video game, but the cameos alone make me think this will be worth the price of admission.