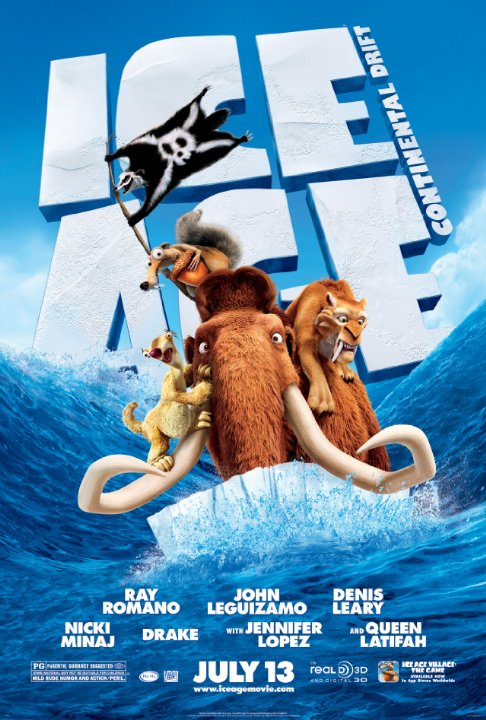 Plot: Manny, Diego, and Sid are caught on an iceberg/ship as their continent is set adrift. Finding pirates and sea creatures along the way, the friends will have to figure out how to make things work in a whole new world. -- Chris Kavan

The movie is fine. I haven't seen the previous three installment but I liked this. Fun and entertaining. Perfect to those who just want a light yet enjoyable movie! :)

Is it just me or the characters never age a bit. Manny, Diego, and Sid are caught on an iceberg/ship as their continent is set adrift. Finding pirates and sea creatures along the way, the friends will have to figure out how to make things work in a whole new world. The animation is good and the 3-D was not good at all see it in 2-D.

Ice Age pushed it a little far coming out with a 4th film. I came in expecting a good movie, cause I feel the franchise handled the first three films perfectly. This movie was flat, unimaginative, and unfunny. It is unfortunate (hopeful) end to what is a great franchise for families. I honestly could not stand the voice actors they chose for the new characters. Lopez and whoever played 'Peaches' drove me up the wall. My kid seemed to ike it though, so don't avoid it for the family. Just don't be expecting a movie that you can fully enjoy while watching it with your kids.

The huge decline in quality of the 'Ice Age' series is most evident in the absolute lazy, uncaring, paint-by-numbers agenda of this fourth installment. Where is the effort? It's so obvious everyone involved is cashing a paycheck. All of the negatives from the previous sequel are made even worse this time. The jokes and characters aren't just bad, they're flat out annoying. While each of the other movies had a family oriented theme, this one substitutes that with some poorly written surface level lame sitcom attempt at drama amidst a pointless pirate battle adventure. It's a slog to sit through. The Scrat side quest (again) was the only bit of mild entertainment present. His finale became a great and hilarious payoff to his long running gag. If it weren't for this sub-plot, …

No posts have been made on this movie yet. Be the first to start talking about Ice Age: Continental Drift!