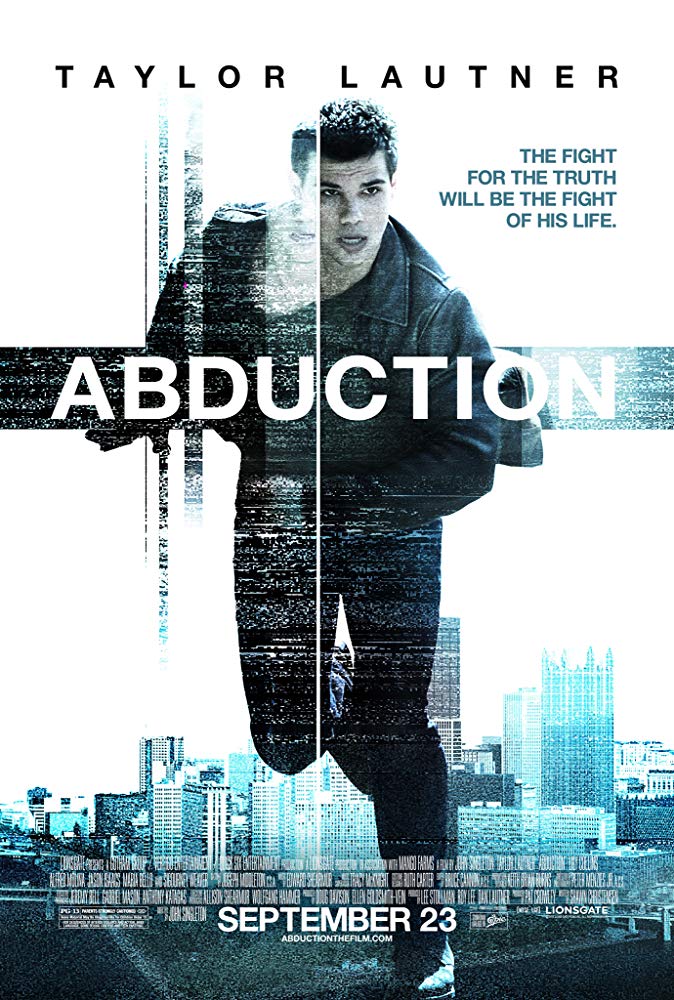 Plot: When Nathan discovers his baby picture amongst others on a missing persons website, he sets out to discover the truth about his life. -- Chris Kavan

Is it just me or shark boy's acting is getting worst. Okay this is abduction and this film SUCKED, bad acting and weak story.

Blah - it's like a Twilight version of the Bourne movies - a pair of young, good-looking people running around while scary people try to kill them. Lautner just is not leading-man material - too wooden and completely forgettable. Despite the best efforts of Sigourney Weaver, Alfred Molina and Michael Nyqvist, it just never gets off the ground.

Nathan (Taylor Lautner) discovers that he is living with a couple of people pretending to be his parents. A website leads him to truth, only to figure out that this website also leads men to him who have interest on his life, including the CIA. *** Okay. Obviously, this is for Taylor Lautner's fans. Not bad, but also, nothing really great unlike what others trying to portray that it is a good action and highly rated. Definitely not the "best movie" nor "best action" NO PLEASE! This movie is created for Lautner's fan and just to entertain. And wait! Just want you to be warned, the movie has nothing to do with abduction.

For what it's worth, I was actually pretty entertained by this movie, flaws and all. The acting is pretty bad; Taylor Lautner is horrible, but is not just him that is bad, there are some very capable actors here that do not deliver. The fault is not on them entirely because the script is bad as well, there is some atrocious dialogue in this film. The main problem with Abduction though is the plot. There are gaping plot holes in the narrative that just leaves way too much up in the air; by the end of the movie you still won't have any clue who any of the players are, whether they were good/bad, or what their motives were. This makes for a film that has some decent action sequences that entertain, but a story that frankly makes zero logical sense.

Ok i see that Rotten Tomatoes has given it a rating of 4%??? I personally think thats kinda harsh and i'm kinda glad i didnt let that stop me from seeing this. Well actually those that collect the cash made from this film can thank my donation due to my 9 yr old daughter who aside from Justin Beiber literally worships the ground Taylor Laughtner walks on!! C'mon people this film wasn't that bad i have seen much worse just have a look at my worst movies ever list on this excellent movie site and you will see.

However i felt the movie's storyline could've been improved in a few ways. I personally enjoy seeing Taylor's presence on the big screen, I mean alot of cool actors throughout the years have been given really below average ratings and still chugged right along. So i hope that …

Nathan Harper (Taylor Lautner) always felt he was different so his school lets him attend session with Dr. Geraldine "Geri" Bennett (Sigourney Weaver). Karen Murphy (Lily Collins) in some weird consequential situation becomes partners with Karen Murphy (Lily Collins), his neighbor and crush. So many action packed scenes only to have a lousy conclusion and poor character development. An only noteworthy line was âItâs a messy world Nathan.â A lot of cheesy moments to swallow because of the long overdue romance and irresponsible father, copycat Bourne version with lack of a better plot. You never discover about Nathan's father only until the end, which no clear face was even displayed. A memory of a dead mother in which he never knew, and 2 CIA undercover agents who can't even …

Movie trailers are supposed to entice the public into spending time and money in watching the movie the trailer is trying to sell. There was nothing in the trailer for this movie that suggested it was original entertainment. Perhaps I will catch it on Redbox on a rainy day when I have nothing better to do.

If you cared to watch the movie before making posts that are incorrect&amp;nbsp;maybe&amp;nbsp ;you'd realize that its not the Bourne series. Abduction is an amazing movie, Nathan Harper (Taylor Lautner) is running from both the CIA and Enemy Agents trying to wait find someone he can trust because his father left him in the care of &quot;Keepers&quot; when he was three after his mother was killed. He's fleeing the CIA because the agent in charge of finding Nathan is actually trying to find a list that Nathan's &hellip;

I saw that 2011 is going to be the year with the most remakes and sequels yet - originality isn't dead, but it often curls up into a ball and whimpers while the umpteenth sequel or yet another 80s films / TV series / comic book gets adapted to the big screen.

Hollywood is out of ideas. The same concept gets recycled for a new generation. This has the Bourne Identity oozing from every direction...&quot;Who am I, who is chasing me, how come I know killer action moves without reason?&quot;