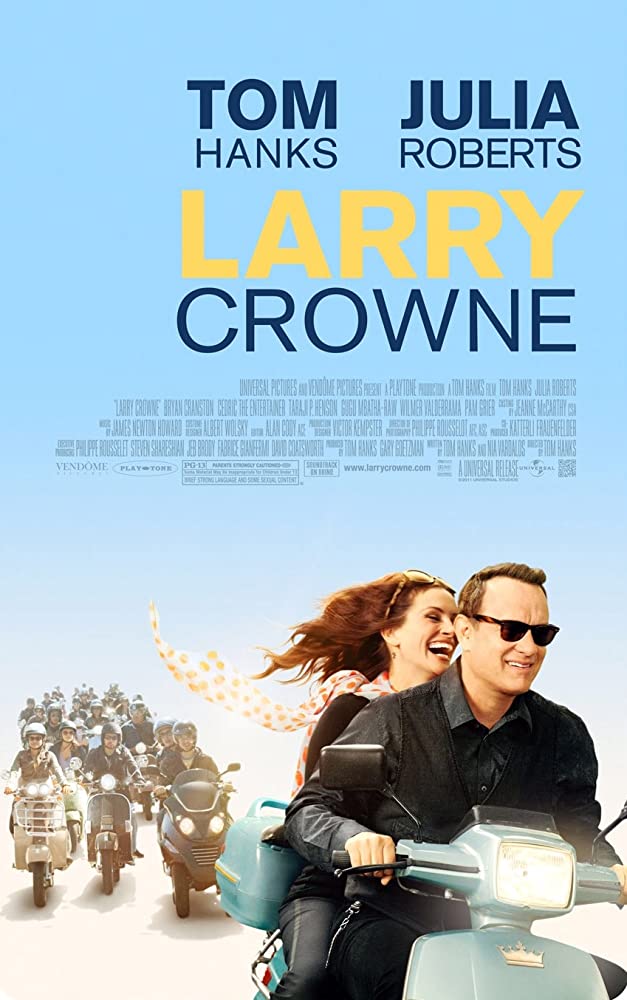 Plot: A man who has worked for the same big-box company all his life finds himself adrift after being downsized. He ends up back in college, where he bonds with an eclectic group of scooter-riding misfits. He also finds himself falling for his public-speaking teacher, a woman who is almost burned out herself, on teaching and love. -- Chris Kavan

Any movie that stars both Tom Hanks and Julia Roberts should do well at the box office. Larry Crowne surprisingly did not bring in the big bucks. I, myself, waited until the DVD to view it. I think it is because the storyline is too real for movie viewers who want an excape from realism...this movie is immersed in it. Loosing a job, going back to school, loosing a house, difficulty finding work. The acting by both lead characters, as well as the extension characters, are very well played, but what turned me off from giving this movie a four star rating is the direction of the film. I felt like I needed air after viewing it because it was as if I was going through what Larry Crowne experienced, and it left me feeling somewhat depressed.

Saw a preview of it about a week ago. It was decent, but Tom Hanks was overenthusiastic. However, that is better than his complete seriousness (and long hair) in the Davinci Code. Also Julia Roberts plays this up-tight teacher, and really, it works if you don't care for her that much (which I don't). Overall, it is an okay watch, but nothing substantial. Tom Hanks should probably not direct in the future. It's not a bad movie and you can tell he tried, but it just isn't something you can recommend to everyone.

Tom Hanks plays Larry Crowne, who is a middle-aged divorcÃ©e struggling to pay for his house and a divorce settlement working at a retail store. After winning 8 employees of the month awards he is fired from his job because he didn't go to college.

Larry Crowne gets fired in a company where he worked all his life. And because the company complained on his educational background, he has to go back at school and finish college after getting laid-off officially. There he meets new people, friends, and women which will lead him to new life.

I loved this movie! No so much drama, and feels good to watch. I really appreciate films like this, realistic storyline, good actors, and smooth direction. Tom Hanks and Julia Roberts were both good in this film. Some people complain about Hanks' direction, but for me, it's just good, the whole film went well from start to finish.

It was a good watch. Good story and some touches of humor. I also had fun watching the the supporting cast.

Bad Things Happen But This Movei Is Good

Larry Crowne was a cute movie with some heart that had a special place in my heart. Having lost my job in the last year, decided to go back to school part time and selling my house I could some what connect with Larry.

As you can guess Tom Hanks and Julia Roberts were great in their respective rolls. Tom hanks made Larry believable as a guy who was down on his luck but I liked the eternal optimism and hope he made Larry have even when he was at the bottom. I could really identify with that because I felt like that at time in the last year. Julia Roberts played a great women in a unhappy marriage who finally decides to leave and move on. Neither of these parts were ground breaking oscar winning roles but they each played the character to perfection as you would expect from two great …

No posts have been made on this movie yet. Be the first to start talking about Larry Crowne!