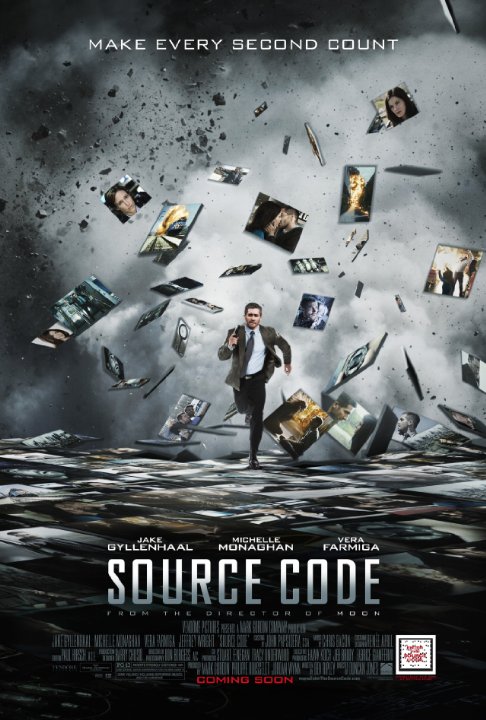 Plot: A soldier takes part in an experimental procedure to solve a train bombing. His consciousness is transferred to the body of a commuter where he experiences the bombing over and over again until he can track down the culprit. -- Chris Kavan

The film is about a soldier takes part in an experimental procedure to solve a train bombing. His consciousness is transferred to the body of a commuter where he experiences the bombing over and over again until he can track down the culprit. This movie has clever writing and brilliant directing. but the one problem I had with this movie is it's way to short.

A really smart film. Unfortunately, it was also forgotten by many people, partly due its release date in Spring 2011; it came out in the weird months prior to blockbuster season. The repeating 8 minute scene never gets old as director Duncan Jones (Moon) proves he is a solid director in his second directorial effort.

This is one of the best films of 2011. I just love how it involves brain work. It has plenty of action and a little emotions to back it up. It might be confusing in the beginning but in the end, all is clear. It obviously outdid the matrix, and was almost at the same level as inception, but all the same this film kicked ass. It is recommendable to anybody who wants a real movie

An ex-army pilot finds himself living another man's life and discovers that he is operating within a secret government project where they send a person's consciousness back in time to discover terrorist threats. Duncan Jones' follow up to the pleasingly old school sci-fi Moon is a variation on the idea behind La Jetee, the short that inspired Twelve Monkeys. Basically it's Groundhog Day done as thriller instead of comedy as Jake Gyllenhaal lives the same eight minutes of a commuter's life over and over until he discovers the identity of the bomber who blew up the train he was travelling on. The concept will be familiar to those old enough to remember 90s tea-time sci fi show Quantum Leap and it also shares ingredients with films such as Robocop and Total Recall. To be honest, take away …

Had Potential, But It's Ultimately A Mess

The premise behind Source Code is that a man named Colter Stevens wakes up in the body of an unknown man, on a train. Completely confused, Colter panics until the train ultimately explodes. He awakens again in a capsule, where he is informed through a monitor that he has the ability to inhabit other people's body through a process called Source Code. Through Source Code, Colter lives the person's last 8 …

Wajiha, I agree with you. &amp;nbsp;That would've been a more satisfying ending to me. &amp;nbsp;The rest of the movie is fantastic!

Even with all the hundreds of plotholes, I loved it. *SPOILER* It should ended like this: Goodwin gets a text message from him at the end , but they don't show anything else, just the text message, cliffhanger. not Gyllenhall living happily ever after, not the changing reality and not the explosion not happening.*SPOILER*