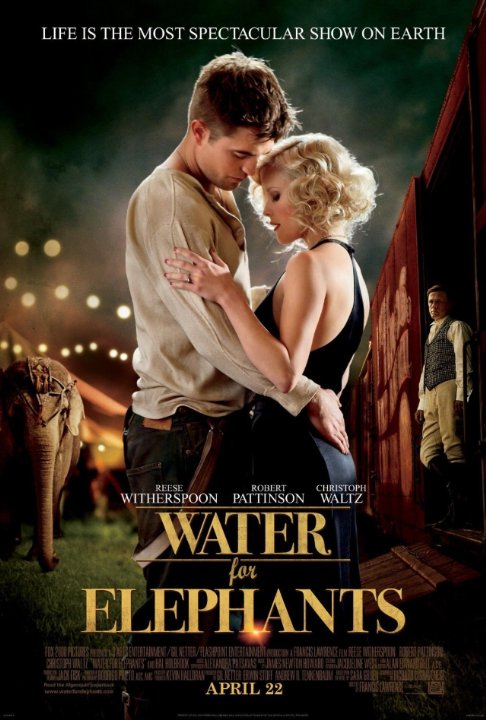 Plot: After the death of his parents a veterinary student gives up on school and joins a traveling circus as their personal vet. -- Chris Kavan

Although the source material is there, it feels vapid and stiff. In other words, the exact opposite of the novel.

Water for Elephants, directed by Francis Lawrence is an exciting story filled with love, deception, and lots of circus animals. The story follws Jacob (Robert Pattinson), a veterinary school student who, in an attempt to escape his past life, discovers circus life. Jacob is introduced to the circus' star act, Marlena (Reese Witherspoon) and they shared a bond over the circus' newest attraction, the elephant. The movie ends in excitement as Marlena's husband and circus owner, August (Christoph Waltz), becomes aware of Jacob and Marlena's relationship and seeks revenge. A "terrible accident" leaves a few dead, and ended the circus forever, but Jacob and Marlena's love prevails.

I was shocked at how good of movie this. I was surprised. Robert Pattinson does a good job of playing his character. He is not a great actor but I thought he was Ok. Witherspoon is great and Chris Waltz does well as usual. I loved the Circus history thrown in. Best movie of 2011 so far.

Jacob, (Twilight hottie Robert Pattinson not Taylor Lautner) a finishing student at Cornell University is studying to become a veterinarian but after learning of his parentsâ untimely death in a car accident Jacob finds out they had mortgaged the homestead to pay for his college. In an instant, Jacob has lost everything, his home, his parents, and his career. He jumps a circus freight train as a stowaway but eventually becomes the vet when the ringmaster realizes there is the need.

The star attraction, a big white horse has developed a nasty sore on its hoof. Jacob realizes the horse is in severe pain and must be put down but the tyrannical ring master August (Christophe Waltz who is really getting some meaty âbad-guyâ roles and is absolutely brilliant throughout the movie) …

A Clean and Pleasant Watch

After the car accident his parents met just before he finished his Veterinary studies, Jacob finds himself caring and teaching animals for a circus company. And there he finds a woman who brings him both amazement and struggles of the show.

Okay. Before watching, I wasn't expecting that much from this film. But it turned out that it exceeded on my expectation. Clean plot, clean execution, clean acting especially from Witherspoon and Waltz, except the smiles from that vampire turned vet guy. I don't get the point of his smiles, I understand his character but his smiles in particular kept me wondering WHY LIKE THAT? Ooops. Sorry! maybe I just don't appreciate much of the acting of Robert Pattinson. Okay. Going to my real concern, I didn't see the necessity of doing it in a …

Devastated by the sudden death of his parents at the height of the Great Depression, a young dreamer from the wrong side of the tracks, Jacob Jankowski (Robert Pattinson), abandons his veterinary studies at Cornell University and -- of all things -- joins the circus. Hired as a veterinarian to care for the animals of The Benzini Brothers Most Spectacular Show on Earth, Jacob works his way into the hearts and minds of the troupe. But when he falls in love with the star attraction, Marlena (Reese Witherspoon), who just happens to be the wife of the circus's owner -- the violent and abusive August (Christoph Waltz) -- Jacob makes a fatal decision that changes his life and the lives of everyone around him. Ah, finally, an old-fashioned Hollywood movie for a year that has seen nothing but …

No posts have been made on this movie yet. Be the first to start talking about Water for Elephants!