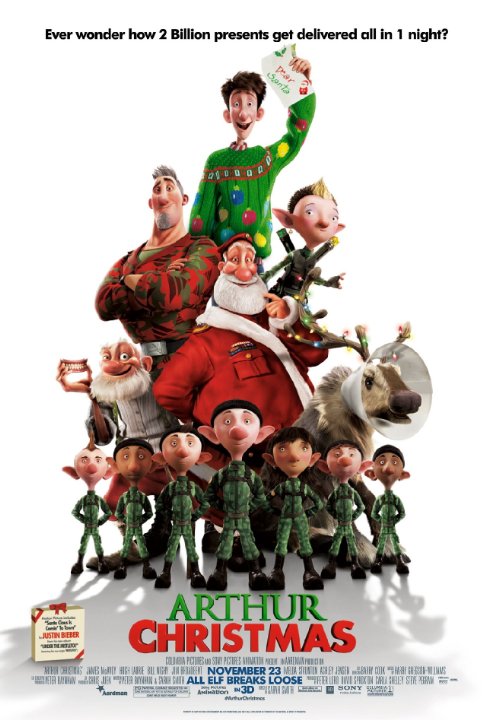 Plot: Arthur Christmas is given an important task on Christmas Eve that must be completed by morning. With his family ties, the secret to how Santa completes his one-night delivery is also revealed in the high-tech North Pole base of operations. -- Chris Kavan

The story is about Arthur Christmas is given an important task on Christmas Eve that must be completed by morning. With his family ties, the secret to how Santa completes his one-night delivery is also revealed in the high-tech North Pole base of operations. A heart warming movie with a good message and good story.

This movie was nothing special. Just another Christmas movie. It has high praise on many sites, including this one. I just dont see it. I mean it is worth the watch if you are looking to watch a bunch of Christmas movies around the holidays, but it is not one that will stand up for any amount of time. Its silly and just stretched thin. My 7 yr old was not a fan either.

The story celebrates the idea of what Christmas means to a child. The plot, characters and humor are all quite clever. I laughed continuously and had an enjoyable time watching it.

Some films are destined to be classics. And while Arthur Christmas is far from a masterpiece, it certainly feels like a movie that could quickly become a Christmas tradition among many families. It's funny, it's cute, it's warm. What more could you ask of a Christmas film?

Aardman presents a much more modern version of Santa Claus then what audiences are used to. A small army of elves are deposited into towns via the S-1; a giant spaceship of a sled that blends into the sky as to avoid suspicion. The elves, like spies break into people's houses to plant presents for all the nice children (and Santa is in charge of laying a single present under the tree of select houses).

As expected Christmas Eve goes without a hitch...until it's discovered an hour later that a child was missed. …

My DVD's: Animation by Snoogans

My trips to the cinema 2011 by Maxine the Movie Gal

No posts have been made on this movie yet. Be the first to start talking about Arthur Christmas!