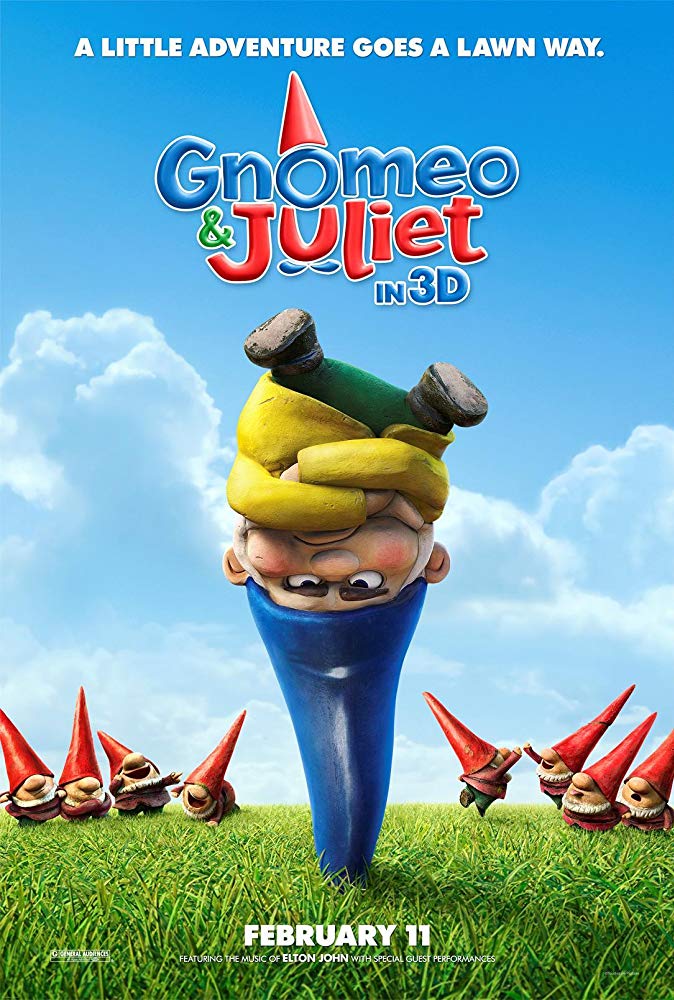 Plot: The classic Shakespeare play is transformed into a love story set in the competitive world of indoor and outdoor gnomes. -- Chris Kavan

Shakespeare's Romeo and Juliet, with garden gnomes? Sounds a little silly, but it's actually a lot of fun. The animation is good, as is the music by Elton John. Some of the voice work was a little bland, but I still had a fun time with this movie. A really cute little animated film!

In this story the Montagues and Capulets live in different gardens (even their human garden owners hate each other) and when the humanoids go to work, the garden gnomes come alive when they leave. Separated by a fence, blue gnomes live in one backyard, while the red gnomes live on the other one. The two groups of gnomes have an ongoing rivalry as to whose garden is best. They constantly try to sabotage each other and dislike each other immensely. While trying to retrieve an orchid for her garden, Juliet (Emily Blunt), a red gnome, meets Gnomeo (James McAvoy), a blue gnome, and they fall in love and try to keep their romance secret. Can their relationship flourish against the odds?

Gnomeo and Juliet, quite clearly (judging from the title), is based on William Shakespeare's tragedy …

Touchstone - what is the box office prediction for this film. Seems that studios have pretty much given up on January and Feb considering the lackluster amount of films coming out.

Hey All -Here on behalf of Touchstone Pictures, and figured I'd get some conversation going on this film. Who's excited to see the classic Shakespeare tale told through the characters of garden gnomes? From the footage released so far, it looks very funny. Below is a great inside look at the film and its talented cast. http://www.disneydreaming .com/2011/01/15/gnomeo-an d-juliet-featurette-whats -in-a-gnome/